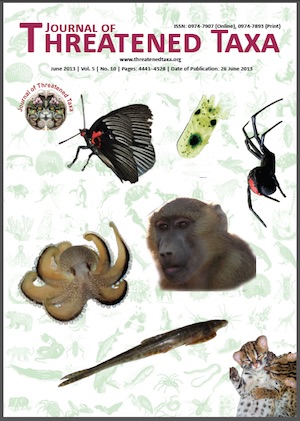 Like many primate species in West Africa, habitat loss and intensive hunting are threatening the poorly studied Guinea Baboon (Papio papio). These factors contributed to a significant population contraction during the last 30 years. Our study presents genetic diversity estimates for the Guinea Baboon based on a 391 base pair fragment of the mitochondrial DNA D-loop hypervariable region I. We used non-invasively collected genetic samples from two locations in Guinea-Bissau: Cufada Lagoons Natural Park and Cantanhez Forest National Park. Although most sampling was opportunistic, we observed and collected samples from two dames (social units). Among the 25 sequences obtained, we found seven closely related mtDNA haplotypes and one highly different haplotype. The presence of this divergent haplotype suggests a contact area between genetically differentiated populations in Cufada Lagoons Natural Park, or dispersal of individuals. The samples gathered from both regions share two of the most common haplotypes in different frequencies, but also exhibit unique haplotypes. No significant genetic differentiation was found between social units from both regions, possibly due to common ancestral origin or frequent dispersal between sampling locations. The presence of different maternal lineages in the same social unit and a higher percentage of variation within social units suggest historical female-biased dispersal for Guinea-Bissau Baboons. We further compared mitochondrial genetic diversity of Guinea and Hamadryas Baboons. We found lower haplotype, nucleotide and theta diversity for Guinea Baboons, which points to different demographic histories of these species. This work supports the need for additional genetic studies within the full Guinea Baboon range.