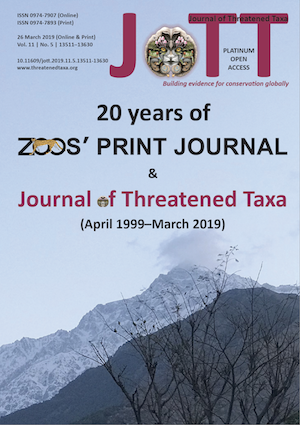 Reliable population estimate of apex predators, such as the Leopard Panthera pardus fusca, is important as they indicate ecosystem health, enable evaluation of the effectiveness of conservation efforts and provide a benchmark for future management decisions.  The present study is the first to estimate abundance of Leopard along with possible prey profile in Kuno Wildlife Sanctuary (KWLS), in central Madhya Pradesh (M.P.), India.  For systematic sampling, two study habitats, 15kmÂ² each, were identified, one close to the park entrance and the other away from the park entrance.  Sampling was carried out between March and April 2017, for a period of 18 days in each of the two study habitats, â€˜goodâ€™ and â€˜poorâ€™, initially based on situation in reference to park-entry.  Each habitat was divided into five blocks each, and each block subdivided into three, 1kmÂ² observation units.  In all, 16 trail cameras were placed in pairs, one set at a time in five of the blocks, over a sixâ€“day period.  The total sampling effort was 180 trap-nights.  The trigger speed was set to 3 frames per 10 seconds, and repeated only after 20 minutes interval on infra-red detection of object.  The data was analysed using closed population captureâ€“recapture analyses in Program MARK, to estimate Leopard abundance.  Seventy-eight Leopard detections representing eight unique individuals were found in the 30kmÂ² study site.  Seven Leopards were detected in the good habitat and one in the poor habitat. The estimate for Leopard abundance for the good habitat was 11 Leopards (SE 4.6, 95% CI = 8 â€“ 31 individuals).  Due to limited captures/recaptures in the poor habitat, abundance could not be estimated for this habitat class.