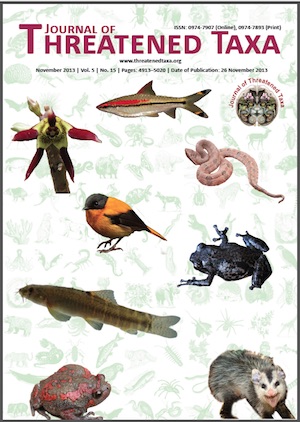 We present here a comprehensive account of the diversity, distribution, threats, and suggest conservation measures for the fishes of Bharathapuzha, the largest west flowing river in the southern Indian state of Kerala. A total of 117 species under 43 families and 81 genera were recorded from the river, of which 98 were primary freshwater and 19 were secondary freshwater and/or diadromous species. Six species of non-native fish were also recorded, of which three were exotic to the country and three were transplanted from the gangetic plains. Twenty-eight percent (S = 33) of species that occur in the Bharathapuzha are endemic to the Western Ghats, while three species (Balitora jalpalli, Mesonoemacheilus remadevii and Pseudolaguvia austrina) are restricted in their distribution to the river system. A little more than one-tenth (11%; S = 13) of species that occur in the river are listed under various threatened categories on the IUCN Red List. As part of this study, we also extend the distribution range of Osteochilichthys longidorsalis to the Bharathapuzha River system, based on its collection from the Thoothapuzha tributary. Several anthropogenic stressors including deforestation and loss of riparian cover, dams and other impoundments, pollution, sand mining, non-native species and destructive fishing practices are threatening the rich ichthyofaunal diversity and endemism in the Bharathapuzha. There is hence an urgent need to develop and implement conservation plans, some of which are discussed.