Study on biological and ecological characteristics of mudskippers

Fish are the most diverse and numerous group of vertebrates in the world.  This indicates the importance of fish among vertebrates in biodiversity and evolutionary studies since they exhibit morphological, physiological, and behavioural adaptations (Sattari 2003).  Access to biological and ecological information on fish stocks can be very helpful in understanding the status of fish in the future.  In other words, the ecological data presented on the status of fish species in aquatic ecosystems can be highly effective in directing and achieving management-protection policies in the future.  Hence, this information can be used by experts and fishery managers.

Mudskippers (Teleostei: Gobiidae: Oxudercinae) are a group of fish that live in intertidal zones of mangrove ecosystems (Graham 1997; Abdoli et al. 2017).  According to Polgar & Crosa (2009), there are about 30 species of mudskippers around the world that belong to four genera: Periophthalmus, Periophthalmodon, Boleophthalmus, and Scartelaos.  These fishes are air-breathing gobies that are found in the coasts of Africa, Asia, and Australia (Kutschera et al. 2008; Kutschera & Elliott 2013).  Therefore, these fishes can be used as ecological indicators to study and detect pollution levels in aquatic ecosystems.

Mudskippers live in ecosystems that have severe environmental conditions such as large fluctuations in temperature, high turbidity, low oxygen, and high levels of pollution (Abdoli et al. 2017).  In spite of these conditions, they adapt themselves to live in these ecosystems (Murdy 1989).  In fact, adaptation in morphological, physiological and behavioural traits enable them to move between aquatic and terrestrial habitats (Colombini et al. 1996; Kutschera et al. 2008).

Due to the ecological importance of mudskippers, it is necessary to provide a comprehensive reference about these fishes.  Therefore, the present work aims to introduce the current book titled Fishes out of Water: Biology and Ecology of Mudskippers edited by Zeehan Jaafar and Edward O. Murdy.  This book contains 15 chapters published by CRC press in 2017.  Because of its valuable content, this book has become a complete reference on mudskippers.  This valid reference will be useful for a wide range of students, researchers, and specialists in the fields of evolution, environment, fish behaviour, and physiology.

This work attempts to review the chapters of this book.  In the current book, the aspects of biology and ecology of mudskippers such as anatomy, distribution, systematics, physiology, and conservation are studied.  The unique adaptations of these fishes in nature are also fully explored.

The first chapter examines the taxonomy and systematic aspects of mudskippers.  In this chapter, the authors state that mudskippers are tropical and subtropical fishes belonging to the family Oxudercidae and subfamily Oxudercinae (Order: Gobiiformes).  They also provide the first reports on the description of mudskipper species.  For example, the authors state that Gobius pectinirostris and G. barbarus were first described in 1758 and 1766, respectively.  The second chapter focuses on the distribution of mudskippers in the world.  The findings have shown that mudskipper species are widely distributed in the tropical and subtropical coastal habitats of the Indo-West Pacific (IWP) and the eastern Atlantic.  Chapters 3 and 4 study the early development, age, and growth of mudskippers.  The authors investigate early development in some species of mudskippers (Ps. argentilineatus and Ps. modestus).  The study on the development of mudskipper species in their early life stages can provide useful information on the growth pattern of the species.

Chapter 5 reviews respiratory and circulatory adaptations in mudskippers.  In this chapter, the authors focus on respiratory organs in mudskipper species.  They state that these species have been considered aquatic air-breathing fishes.  Therefore, the respiratory system of these fishes is different from that of others.  In chapter 6, the structure and function of sensory organs are investigated.  The olfactory organ is considered important and key in the respiratory system of fish.  The structure of the olfactory organ in mudskippers is very different from that in other fish and is of a unique type.  Studies have shown that the unique structure of the olfactory organ in mudskipper species can be the result of adaptation in specific conditions (from aquatic habitat to land).  Chapter 7 focuses on nitrogen metabolism and nitrogenous waste excretion in two mudskipper species, Periophthalmodon schlosseri and Boleophthalmus boddarti.  The obtained results show that these fish species have ornithine-urea cycle in their bodies.  This cycle can establish a balance for fish in aquatic and terrestrial habitats.  In Chapter 8, locomotion patterns of mudskippers in aquatic and terrestrial environments are investigated.  The authors reviewed ‘sustained’ and ‘burst’ locomotor patterns in these fishes.  These locomotor patterns have also been formed to adapt the fish to environmental conditions.  Chapters 9 and 10 examine the biological characteristics of mudskippers, including reproductive strategy and feeding behaviour.  Authors state that ecological conditions like hypoxia can affect these biological characteristics.

Chapter 11 focuses on territoriality, aggression, and courtship behaviours in mudskipper species.  Territory behaviour in these fishes usually occurs to preserve their habitats.  Courtship behaviour, however, is carried out by male fishes during mating to attract attention of many more females.  The investigation of these behaviours can be useful to the study of ethology in mudskippers.

Chapter 12 is intended to investigate the spatiotemporal changes in the distribution of mudskipper species.  In this chapter, the authors acknowledge that the spatiotemporal variations of mudskipper species indicate their adaptation to semi-terrestrial habitats.  In Chapter 13, the care and management of mudskipper species in captivity conditions are investigated.  In fact, mudskippers are very interesting and attractive fishes and there is a high tendency to keep them in captivity.  Therefore, it is necessary to manage these fish species in artificial environments such as aquariums.  In this chapter, authors provide important and useful information about the proper preservation of mudskipper species in aquariums.  This information is derived from the biological and ecological characteristics of mudskippers in natural habitats.  Chapter 14 investigates the conservation of fish habitats.  Anthropogenic activities are one of the most important factors that can destroy the habitats of fishes.  Coastal development, pollution of water resources, and creation of heterogeneity in habitats such as mangrove forests are examples of anthropogenic activities that affect the habitats of mudskippers.  Unfortunately, human dependence on natural resources such as forests and aquatic ecosystems has increased the severity of these effects.

In chapter 15, the final chapter, the leading challenges of future researches about mudskippers are discussed.  The authors state that little works have been carried out on their natural history and ecology.  Therefore, it is necessary to carry out further researches with the aim of examining the biological and ecological characteristics of mudskippers.  In addition, the authors explain that coastal development in different parts of the world, such as Australia, has destroyed the habitats of mudskippers.  Hence, local government and international organizations should lay down appropriate rules for protecting the habitats of these aquatic species.

The strengths of the current book can be summarized as followed:

The study on the biology and ecology of mudskippers is interesting and attractive.

Each chapter is written by a number of expert authors and specialists.  In addition, both editors have done many studies on mudskippers and have high expertise and experience in this field.

The proper structure and arrangement of chapters will draw the reader’s attention to research topics.

Use of up-to-date and new references.

The current book can be used as an ideal and perfect reference for the study on the biology and ecology of mudskippers.  Therefore, we recommend that copies of this book be distributed to universities and research institutes.  Considering the ecological importance of mudskippers among fish, this book can provide useful information for biologists, ecologists, ichthyologists, and other enthusiasts. 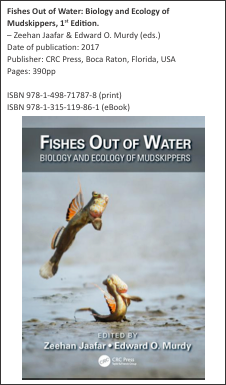 Colombini, I., R. Berti, A. Nocita & L. Chelazzi (1996). Foraging strategy of the mudskipper Periophthalmus sobrinuseggert in a Kenyan mangrove. Journal of Experimental Marine Biology and Ecology  197(2): 219–235.

Kutschera, U. & J.M. Elliott (2013). Do mudskippers and lungfishes elucidate the early evolution of four-limbed vertebrates? Evolution: Education and Outreach 6(8): 1–8.

Murdy, E.O. (1989). A taxonomic revision and cladistic analysis of the oxudercine gobies (Gobiidae: Oxudercinae). Records of the  Australian Museum  (Supplement) 11: 1–93.