A first report and additional description of the assassin bug Neostaccia plebeja (Stål) (Heteroptera: Reduviidae) from India with comparative notes on Stacciadiluta Stål from Assam, India

Copyright: © Sarode et al. 2018.Creative Commons Attribution 4.0 International License. JoTT allows unrestricted use of this article in any medium, reproduction and distribution by providing adequate credit to the authors and the source of publication.

Acknowledgements: We are grateful to David Rédei (China) and Petr Kment (Czech Republic) for their continuous support in various ways and for providing essential literature.  We thank Professor and Head, Department of Physics, Savitribai Phule Pune University, for providing SEM facilities.  We thank Mr.Pratik Pansare for collection of the bug from Assam.  We gratefully acknowledge Gunvi Lindberg and Naturhistoriska Riksmuseet, Stockholm for providing images of the type and for permission to use those (Attribution: CC BY-NC 3.0).  Finally, we sincerely acknowledge support and encouragement from the authorities of Modern College.

Abstract: The assassin bug, Neostaccia plebeja (Stål, 1866) (Hemiptera: Heteroptera: Reduviidae: Stenopodainae) is being reported for the first time from India.  It is redescribedwith many illustrations. Comparative photos of the salient characters of Staccia diluta Stål, 1859 are also provided.

A Stenopodainae bug resembling Staccia was collected in Jambut(Sharadwadi), near Shirur, Maharashtra, India.  A careful examination of the head of this specimen showed that there are no spines underneath, in anteocular part, and the labium is also without two pairs of spines, the characters whichare present in Staccia diluta(Stål, 1859). The presence of only one (external) row of large and small spines on fore femur and one row of small setiferous tubercles distinguished it further from S. diluta Stål which has two rows (external as well as internal) of long spines ventrally on fore femur. The long, sharp, anteriorly directed prosternalprocess suggested our species to be similar to what Stål(1866) had described as Staccia plebeja on the basis of a specimen from Ceylon (=Sri Lanka), and later placed it in ‘Stenopodinorum incerti generis’ (Stål1874).  Maldonado Capriles (1990) retained it under Stacciawith the comment ‘incertus generis’. Distant (1904) recorded that as Staccia ? plebeja Stål, with brief diagnosis as translation of Stål’s original description, although with a statement ‘I have not seen this species which, from the above characters, can scarcely belong to the genus Staccia’.

When consulted about the status of S. plebeja,Dr. Dávid Rédei (Nankai University, China, personal communication with H.V. Ghate, October 2016), an expert Heteropterist, pointed out that the characters in this species match those of the genus Neostaccia Miller, 1940. A further search indicated that Kerzhner& Kwon (1996), who studied a male specimen of S. plebejafrom Korea and a female from Myanmar (Bhamo), had transferred this species to Neostaccia and labelled it as ‘Neostaccia plebeja (Stål), new combination’. Actually Nozawa (1990), who recorded it as Neostaccia plebejafrom Saitama Prefecture, Japan, stated that as a new record for Japan and provided drawings of the head in lateral view. In fact, Nozawa(1990) was the first to place this species under Neostacciastating that ‘this species has one row of spines on fore femora and Staccia has two rows’; in the same study Nozawa had also examined Neostaccia aspericeps Miller, 1940.  Because the original description of N.plebeja is very brief and even Kerzhner & Kwon (1996) had not given many details or illustrations (especially of pygophore and phallus), we are providing additional character description and illustrations of this species for the benefit of future readers. Since the previous list of Reduviidae from India (Ambrose 2006) does not include this species, its occurrence in Maharashtra State should be considered as the first record of this species from India.

Staccia diluta is, however, known from India (Ambrose 2006) and has been recently recorded from Odisha (former Orissa State), by Mukherjee & Hassan (2016), who only provided a dorsal habitus photo but not a detailed redescription, figures or images of diagnostic characters.

The collected bugs were preserved in 70% alcohol and subsequently dried for observation.  Properly mounted insects were studied and photographed under a Leica SMZ6 stereozoomwith attached Cannon PowerShot S50 camera.  Several images were taken at different focii and stacked to get the final image using Combine ZM freeware.  The images were processed and cleaned using Photoshop CS5. For preparation of male genitalia, the whole insect was briefly warmed in 10% KOH for 15 to 20 minutes and the pygophore was detached using a fine forceps.  The dissected insects were subsequently treated with dilute acetic acid and washed in 70% alcohol before dry mounting again. The detached pygophorewas boiled in 10% KOH for 2 minutes, cooled and boiled again for 2–3 minutes in fresh 10% KOH.  The pygophore was then stored overnight in 5% KOH before further dissection in distilled water. Dissected phallus and parameres were mounted in Polyvinyl Lactic Acid (PVL) mixture with Lignin Pink dye and photographed under a microscope. Methods of SEM preparations are as stated before (Sheth & Ghate 2014).

Fore legs: coxae moderately long; trochanter with one prominent sub apical spine and two smaller spines in middle part; femora much incrassate, broadest near middle, narrowest at apex, dorsally smooth, with few setae, ventrally with a single row of moderately long spines (internal / anteroventral).  There are three sizes of spines, some are very long and some very short; total number of these spines is about eighteen (Image 1H).  External margin has no spines but there are four distinct setigeroustubercles, each with a long seta, one of which is intact in SEM picture (left Image 1H).  Fore tibia straight, sub equal to femora, slightly compressed. Tarsus compressed. Mid and hind legs slender; posterior femora not surpassing apex of abdomen.

Female structure identical but with following differences: in total length female is slightly longer; head of female is larger than that of male, especially in its width; ocelli are also slightly larger in female. In female hemelytra do not extend up to tip of abdomen as in male. 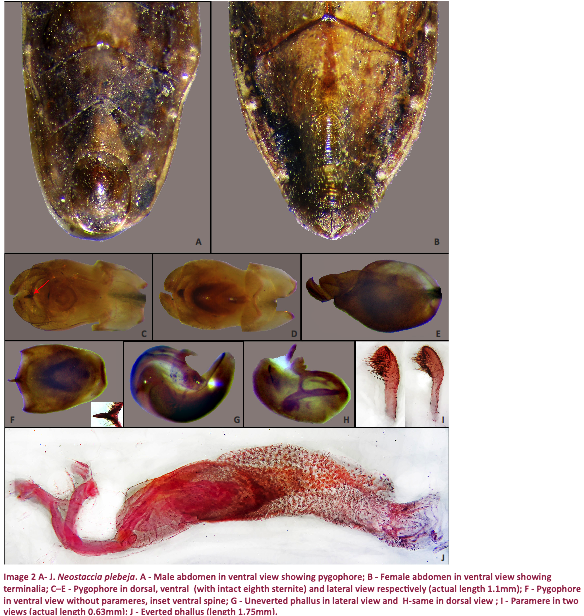 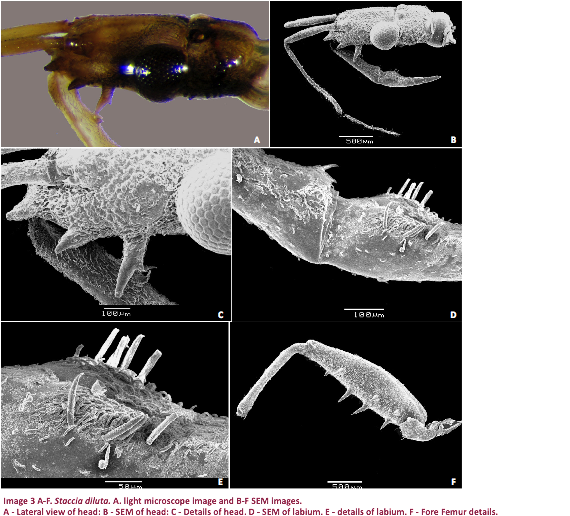 This species was originally placed in Oncocephalus by Stål, to which it resembles very much, and subsequently a new genus was erected to accommodate it.  Distant (1904) has given brief description with the drawings of habitus and lateral view of head. Since our specimen was a mutilated female we are not giving any redescription. It was identified based on structure of the head and fore leg. Here we are showing lateral view of head under stereozoommicroscope (Image 3A) along with SEM images of head and labium (Image 3B-F). The characteristic spines on ventrolateral side of anteocular part are distinct so also the spines on labium. The image of the fore femur shows two clear rows of spines. Image 4 is a composite image of the type specimen of S. diluta(dorsal view, ventral view and fore femur), that was obtained from Swedish Museum and is reproduced here with permission.   Images of the type are copyright of the Swedish Museum.

Materia-l studied:  Not preserved as this specimen was usedfor SEM, one dead female of Staccia diluta, was found in spider web in Assam, coll. P. Pansare, 04.i.2017. 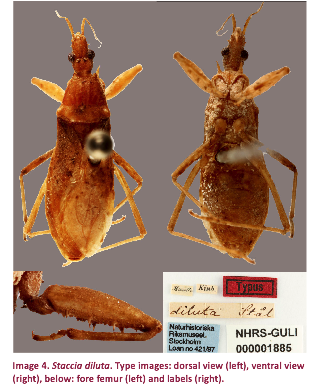 Miller (1940) defined Neostaccia with the following characters, given verbatim here as: “Basal segment of antennae about as long as anteocular.  Eyes somewhat large, prominent. Head thick, broadly globose behind eyes, laterally ventrally tuberculate behind eyes. Basal segment of rostrum longer than remaining segments together. Pronotum trapeziform; anterior lobe longer than posterior lobe; prosternum with anterior spinousprocess. Scutellum triangular, constricted sub-apically.  Hemelytra extending to apex of abdomen. Anterior femora incrassate with a single row of long and short spines on lower surface.” Characters of all our N. plebeja match well with the diagnosis of the genus and also that of the species, confirming that our identification is correct.  We are not aware of any description of pygophore or phallus of any Neostacciaand so our figures become an additional information for this genus.

Some additional characters of N. plebejaare given here with illustrations. Some observations on Staccia diluta are also presented, for comparison, on the basis of a single mutilated specimen found in a spider web at Assam in February 2017.

Of the 10 species of Staccia, S. javanica is the only other species recorded from India, as per the available literature (Maldonado-Capriles1990; Ambrose 2006).  Staccia baliensisMiller, 1940 occurs in Bali and the other eight species are known from Africa.  Staccia diluta seems more widespread and occurs in ‘Cambodia, Thailand, Sri Lanka, Burma, Malay Peninsula, Vietnam, China, Formosa, Japan’ (Maldonado-Capriles1990).  This species has also been described in greater detail with some SEM images in Korean language by Lee et al. (1999).  Mukherjee & Hassan (2016) recorded S.diluta from Odisha in India.

Maldonado-Capriles, J. (1990). Systematic Catalogue of the Reduviidae of the World (Insecta: Heteroptera). A Special Edition of Caribbean Journal of Science 694pp.