Copyright: © Kaleshkumar et al. 2018. Creative Commons Attribution 4.0 International License. JoTT allows unrestricted use of this article in any medium, reproduction and distribution by providing adequate credit to the authors and the source of publication.

For Tamil abstract see end of this article.

Author Details: Mr. K. Kaleshkumar is a PhD research scholar in the Department of Marine Science, whose interest include diversity, distribution, traditional and molecular taxonomy and nutritional evaluation of marine pufferfishes. Currently working on distribution, molecular taxonomy and biomedical applications of marine pufferfishes from Tamil Nadu, south-eastern coast of India. He has seven years of experience in marine pufferfishes.  Dr. R. Rajaram is an Assistant Professor in the Department of Marine Science of Bharathidasan University and his research interest include the ichthyotaxonomy, marine natural products and pollution of marine organisms especially fishes. Mr. P. Purushothaman is a PhD research scholar in crustacean fisheries division, whose interest includes marine diversity and evolutionary relationships using novel molecular tools. Mr. G. Arun is currently a PhD research scholar, whose interest include taxonomy and ecology of marine hydrozoans. He is experienced in Island ecosystem health assessment, coral transplantation, SCUBA diving, and coastal survey.

Acknowledgements: The authors would like to thank the authorities of Bharathidasan University for the facilities provided.  Authors also thank the University Grants Commission/ Rajiv Gandhi National Fellowship (UGC/RGNF), New Delhi, Government of India, for financial assistance.

Abstract: In the present study, morphological variations in 14 species of two families, Tetraodontidae and Diodontidae, were examined for individuals collected from five different centres in Tamil Nadu in the southeastern coast of India.  Twenty-seven morphological measurements and four meristic characters were taken and used for multivariate analyses such as discriminant function analysis (DFA) & MANOVA.  DFA revealed that the first two functions accounted for more than 75% variation between the species.  Negative allometric values were observed on head length (HL), orbital length (OL), pupil diameter (PD), interorbital length (IOL), pectoral-fin length (PEL), caudal peduncle depth (CPD), dorsal to pectoral fin distance (DPFD), caudal peduncle length (CPL) and post-pectoral-fin length (POPFL) measurements.  Also, MANOVA supported the DFA results.  Additions, allometric relationships, and meristic variations were observed for most of these species.   Moreover, this is the first attempt to describe a greater number of morphological features of the species belonging to the order Tetraodontiformes.

Geographic variation in morphometry has been used to discriminate local forms of fish for over a century (Cadrin 2000).  Phenotypic diversities exist in morphological variations within and among populations (Jeffares et al. 2015) and they may be one of the ways to determine the origin of divergence and speciation (Kerschbaumer et al. 2014). Morphometric analysis reveals the differences in body shape between different individuals to discriminate populations of the same species (Hirsch et al. 2013), which can help for the conservation of biodiversity, management of fishery resources, and identification & discrimination of species.

Both pufferfish and porcupinefish belong to the order Tetraodontiformes.  Tetraodontidae, the family to which pufferfish belong to which includes 27 genera with 184 species, and which is considered the most important family in this orderthat 27 (Matsuura 2015).  Porcupinefish of the family Diodontidae includes 19 species of six genera (Nelson et al. 2016).  Some members of the pufferfish and porcupinefish have commercial value in the food industry and in the aquarium trade (Fiedler 1991). The indeterminate consistency of body and loose skin are the great taxonomic features in genera such as Arothron, Chelonodon, Lagocephalus, Takifugu, and Torquigener.  Many species have not been studied taxonomically in detail by using morphological and meristic characters to classify them into appropriate groups (Randall 1985).  The detailed counts and measurements were provided for freshwater pufferfish of Tetraodon by Dekkers (1975), marine pufferfish of Canthigaster by Allen & Randall (1977), Lagocephalus by Matsuura (2010) & Matsuura et al. (2011), and Torquigener by Hardy (1982a,b, 1983a,b, 1984a,b).

Despite the value and availability of genetic, physiological, behavioral, and ecological data for such studies, systematic ichthyologists continue to depend heavily on morphology for taxonomic characters.  Commonly, fish are classified based on the shapes, sizes, pigmentation patterns, disposition of fins, and other external features (Strauss & Bond 1990).  Pufferfish have been fatally consumed mainly in Japan, China, and Taiwancausing death (Bragdeeswaran & Therasa 2010; Arakawa et al. 2010; Monaliza & Samsur 2011).  A few members of pufferfish are considered as serious hazards to consumers since they contain strong marine toxins that can be lethal to humans.  Therefore, misidentification of the species is a major issue in the trade market and clear identifications of pufferfish are a prime need to solve this problem.

Among the different fish products, fresh and dried pufferfish are an important source of animal protein in Tamil Nadu.  The preservation process starts when it is harvested and becomes complete when it reaches the consumer’s table.  According to Immaculate et al. (2015), paralysis resulting from ingestion of pufferfish was reported from southeastern Asia.  This kind of study, however, has not been carried out on the Indian species.  The improper handling and misidentification of this species can be adverse to human health.  Recently, increasing availability and utilization of pufferfish in Tamil Nadu coast has caused health problems to the consumers.  The current study deals with understanding the morphological variations of pufferfish and porcupinefish.

The sample collections were carried out for a period of two years from August 2014 to July 2016 by regular visits to the landing centres at monthly intervals.  Fourteen species belonging to the families Tetraodontidae and Diodontidae were collected from trash items at all fish landing centres (Image 1).  Collected specimens were transported to the laboratory in fresh conditions and stored at -20oC until further analysis.  The collected specimens were then thawed at room temperature and weighed.  The specimens were identified to species level by referring to standard fishery identification manuals and publications (Fraser-Brunner 1943; Allen & Randall 1977; Leis 1978, 1984; Fischer & Bianchi 1984; Hardy 1982a, b, 1983a, b, 1984a, b; Smith 1958, 1986; Smith & Heemstra 1986; Matsuura 1994, 2002, 2010, 2014; Matsuura et al. 2011; Allen & Erdmann 2012; Randall et al. 2012).

All statistical analyses were performed using the statistical software (SAS 2014).  The allometric relationship of all the characters with standard length was estimated using linear regression model and the significance of the allometric coefficient (b) was fixed (b=1: isometry, b>1: negative allometry, b<1: positive allometry).

For multivariate analysis, to remove the effect of size from the data, all the morphometric measurements were transformed to size-independent shape variables using an allometric method as suggested by Reist (1985).

where Mtrans is the truss measurement after transformation, M is the original truss measurement, SL is the overall mean standard length of a species, and β is the slope regressions of the log M against log SL.  Correlation coefficients were observed between each pair of variables before and after the size effect removal;, the values of which were expected to decrease ,  after the size effect removal (Murta 2000).   Multivariate analysis used in this study consisted of discriminant function analysis (DFA).  DFA was run to test the effectiveness of variables in predicting different groups of species (Tomovic & Dzukic 2003; Loy et al. 2007).  Finally, multivariate analysis of variance (MANOVA) was performed to see the significant differences between the species. 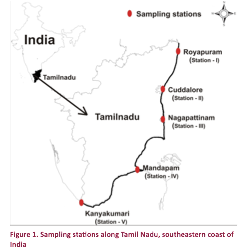 Morphometric data is provided for the 11 species from six genera (Arothron, Lagocephalus, Takifugu, Canthigaster, Torquigener & Chelonodon) of Tetraodontidae and three species from three genera (Chilomycterus, Diodon & Cyclichthys) of Diodontidae in Table 1 & Image 1.  The meristic differences for all the species of both the families are represented in Table 2. The relationship between all morphometric characters and SL has been described and represented in Table 3a, b.

In the present study, four species of Arothron, A. hispidus, A. immaculatus, A. reticularis & A. stellatus, and three species of Lagocephalus, L. guentheri, L. sceleratus & L. lunaris, were investigated by multivariate analyses and exhibited species variation.  The results of DFA indicate that the first two components cumulatively explained 85.4% of the total morphometric variation.  Some of the morphometric variables (HL, OL, PD, PD, IOL, PEL, CPD & SNAD) loaded heavily on DF, which explained 67.7% of the entire differences and few variables from DF2 (DPFD, CPL, POPFL & PRAFL) with 17.7% (Table 4 & Fig. 3).  Additionally, MANOVA analysis also supported and followed the taxonomic status of these species (Table 5).  Lower morphometric differences were observed between A. hispidus & A. stellatus and high differences were noticed in A. reticularis to other species of Arothron group; L. sceleratus & L. lunaris showed less variation in Lagocephalus group (Fig. 3).

Two DF were extracted from the family Diodontidae, exhibiting 95% of the total morphological variation.  Probably all the characters show negative allometry and a few characters were noticed heavy loading on DF1 & DF2 (SNL, INL, DFBL, AFBL, POPFL, POAFL, LCPL, CPD & SNAD) (Table 8).  Finally, the morphometric characters are showed the ability to discriminate the species in families of Tetraodontidae & Diodontidae. The detailed discriminate function was represented in Table 9 & Fig. 5. 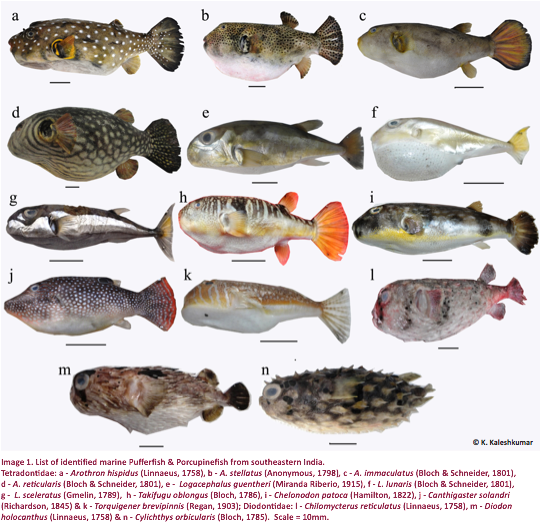 Table 3a. The relationship between all the characters and standard length of Tetradontidae from southeastern India, P<0.01.

Table 3b. The relationship between all the characters and standard length of Tetradontidae from southeastern India, P<0.01.