Abstract: The present study was conducted to determine the diet of Spotted Owlet Athene brama. Analysis of 200 regurgitated pellets collected from eight different locations in Punjab (India) determined average weight, length, breadth and thickness to be 1.0g, 27.0mm, 16.0mm and 12.0mm, respectively.  Remains of a total 433 individual prey were found in these pellets.  Diet of Spotted Owlet consisted of both vertebrates (45.7%) and invertebrates (54.3%).  Among vertebrates, mice (45.0%) were predominant, followed by frogs (0.5%) and birds (0.2%). Among invertebrates, diet mainly consisted of insects (53.8%) followed by molluscs (0.5%).  Insects preyed upon by Spotted Owlet were predominantly of orders Coleoptera(34.9%), followed by Orthoptera (10.2%), Dermaptera (7.9%) and some unidentified orders (0.9%).  The remnants of insects and molluscs in the pellets comprised of wings, legs, head, shells etc.  The average number of mice consumed per pellet was 1.32, with a maximum capacity of consuming up to five mice per night.

Copyright: © Malhotra & Singla 2018. Creative Commons Attribution 4.0 International License. JoTTallows unrestricted use of this article in any medium, reproduction and distribution by providing adequate credit to the authors and the source of publication.

Among the various species found in northern India, the Spotted Owlet Athene brama (Temminck, 1821) is the most com-monsmall-sized owl.  It has adapted to varied environments such as parks, groves, agricultural fields, abandoned buildings in garden and villages, towns and crowded cities, and any open area with trees substantial enough to provide adequate roosts (Sridhara1981; Ali & Ripley 1987).  It roosts in small groups in hollows of trees or branches or in cavities of rocks or buildings.  It is nocturnal and generally crepuscular, but is sometimes seen in the day.  It feeds on diverse prey such as rodents, small birds, reptiles, amphibians and invertebrates such as insects and annelids (Pande et al. 2004, 2007).

Owls generally swallow their prey whole or in large pieces, and the indigestible parts (hair, bones, exoskeleton, etc.) are regurgitated in the form of a pellet.  The pH of an owl’s stomach is less acidic than that of many other predatory birds, and hence most of the bones of ingested prey are left undigested (Smith & Richmond 1972).  The skulls and lower jaws of even the most delicate small mammals and birds are found intact in pellets and can easily be identified (Taylor 1994).

Owls are known for their important role in biocontrol of pests (Pande & Dahanukar2011).  Pellet analysis of owls can provide information on the existence of prey species within the owl’s range, its capability to take such prey and relative abundance of prey species in the owl’s diet.  Such study is very important not only for its significance in conservation but also for their predatory potential, as they are the main predators of insects and non-insect pests of forestry and agricultural importance.  No information is available about their diet composition from northern India. The present study is the first of its kind from Punjab State of India recording information on the dietary composition of Spotted Owlet A. brama and its impact on rodent and insect pest populations around their nesting and roosting sites.

A survey was carried out in different trees, buildings, electric poles, crop fields, other perches etc. in the campus area of Punjab Agricultural University (PAU), Ludhiana and different villages in districts Ludhiana and Fatehgarh Sahib of Punjab (India) during the years 2013–2015 in order to find out the roosting, nesting and perching sites of the Spotted Owlet.  The regurgitated pellets of Spotted Owlet were collected from eight different sites (Table 1, Fig. 1). 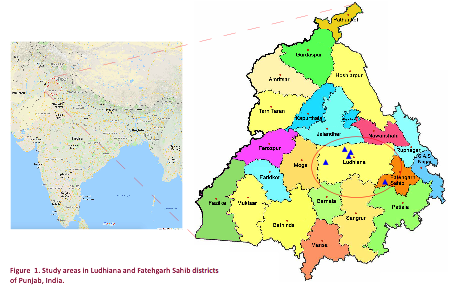 Table 1. Different locations selected for study and the number of pellets collected

Regurgitated pellets found at all the eight sites were collected in polythene bags and brought to the laboratory. In the laboratory, pellets were kept at 600C in a hot air oven for 24hr to kill the associated insects and any other infectious agent.  These pellets were then used for analysis.  All the pellets were first weighed on electronic balance and then their morphometric measurements, i.e., length (mm), breadth (mm) and thickness (mm) were recorded.  To record the diet composition of the Spotted Owlet, each pellet was first soaked in 8% sodium hydroxide solution for about two hours as described by Neelanarayananet al. (1998) and Mittal (1997). This solution assisted in easy separation of the osseous remains (skulls and other bones) and chitinous contents (undigested insect remains) from other contents like hair, debris etc.  The contents were then sieved to separate all the prey remains from the dust and soil particles.  To completely separate the prey remains from these unwanted components, a number of washings were given.  Then the prey remains were put on filter paper and dried in an oven for 24hr at 600C.  After complete drying, the skulls, bones, feathers, beaks and insect remains were separated out for identification of prey items (Shehab 2005).

The identification of different prey items in the diet of Spotted Owlet was made by using the keys developed by Neelanarayananet al. (1998).  Different vertebrate prey items were identified on the basis of lower jaws, skull, limb bones, and pectoral and pelvic girdles.  Depending upon the number of skulls or lower jaws or fore and hind limb bones found in each pellet, number of particular type of prey individual consumed per pellet was determined.  One set of lower jaws (left and right) or one skull or one pair of fore and hind limb bones were counted as remains of one prey item. Insect prey items were identified up to order level on the basis of undigested anatomical pieces such as heads, mandibles, wings, legs, and stings (Naranthiran 1989; Yalden2003).  Different typical structural features on the basis of which insect remains found in pellets were classified into different orders are given below:

Based upon the data, percentage of different prey items in the diet of Spotted Owlet was determined.  The mean number of prey items consumed per pellet was also calculated.  From typical skull characteristics of rodent species (Talmale & Pradhan2009), the individual species of rodents consumed was also identified.

Rodent population in surrounding field crop area was determined by counting the number of active rodent burrows of different species and food consumption (loose mixture of cracked wheat, powdered sugar and groundnut oil in ratio 96: 2: 2) by rodents within a radius of up to 100m, 101–500 m, 501–1,000 m and 1,001-2,000 m from the roosting and nesting sites.  Weighed amount of freshly prepared food was kept on pieces of paper in the evening hours within each radius and the remaining food was collected in the morning, brought to the laboratory and weighed again to determine the percent consumption as per the formula given below:

The data on number of rodent burrows and food consumption by rodents at different radii was analyzed using one-way analysis of variance.

A total of 200 Spotted Owlet pellets were collected from all the eight locations (Table 1).  The pellets were found to be dark black or brown in color.  The old pellets were pale in color and loosely held.  The size of pellets varied from small to large depending upon the kind and number of prey consumed. The average weight of a pellet was found to be 1.0±0.5 g with a range of 0.3–3.5g.  The morphometric measurements of all the pellets collected revealed average length of 27.0±6.0 mm (range 12.0–41.0 mm), breadth of 16.0±4.0 mm (range 10.0–33.0 mm) and thickness of 12.0±3.0 cm (range 6.0–20.0 mm). The weights of Spotted Owlet pellets reported in the present study are similar to those reported in other works (Ali & Santhanakrishnan2012; Nadeem et al. 2012).  Hardy (1977) reported that the size of the pellets depends upon the composition of the diet and the size as well as the nutritive value of the prey taken.

All the pellets collected from different locations were found to contain bones and insect remains. Remains of total 433 prey items were found in 200 pellets.  These were of 195 rodents (only mice), one bird (unidentified), two amphibians (frogs or toads), 151 coleopteran insects, 44 orthopteran insects, 34 dermapteraninsects, four unidentified insects and two unidentified molluscs (Fig. 2).  Overall, based on analysis of all the pellets collected, the diet composition of Spotted Owlet was found to be 45.0% mice, 0.2% birds and 0.5% amphibians, 34.9% coleopteran insects, 10.2% orthopteran insects, 7.9% dermapteraninsects, 0.9% unidentified insects and 0.5% molluscs (Fig. 3).  Vertebrates alone constituted 45.7% and invertebrates constituted 54.3% of the diet of Spotted Owlet.  Among invertebrates, insects alone constituted 53.8% of the diet.

Per pellet analysis of prey composition revealed on average, remains of 1.3 mice, one bird, one frog, one coleopteran, one orthopteran, one dermapteran, one unidentified insect and one mollusc per pellet of the Spotted Owlet. The average number of mice consumed per pellet by Spotted Owlet was 1.32 with maximum capacity of consuming up to five mice per night (Table 2).

The bones of different vertebrate prey items found in pellets collected from all the eight locations are given in Fig. 4. Different bones of mice found were that of skull, lower jaws, ear capsules and other dislocated bones of skull, breast bones, ribs, shoulder bones, bones of fore limbs, hip bones, bones of hind limbs, hand/foot bones, patella, vertebrae and some unidentified bones.  The bones of mouse collected were also arranged in the form of full skeleton showing that almost all the types of bones of mouse were found in pellets (Fig. 5).  Only humerus and femur of bird and femur and tibia-fibula of frog were found in the pellets of Spotted Owlet.

From typical skull characteristics, the rodent species consumed by the Spotted Owlets was identified to be the Field Mouse Mus booduga (Fig. 6).  The average upper molar tooth row of studied skulls of M. booduga was found to be 3.20mm.  The bird and frog found in the pellets could not be identified up to species level. Different parts of insects (wings, legs, head, mouthparts etc.) found in pellets of Spotted Owlet are shown in Fig. 7. 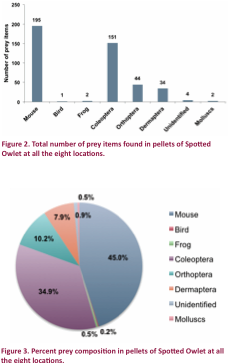 Based on characteristic burrow entrances, different rodent species at all of the three locations were found to be the Lesser Bandicoot Rat, Bandicota bengalensis; the Indian Field Mouse Mus booduga;Indian Gerbil Tatera indica, and the Soft-furred Field Rat Millardia meltada; however, Spotted Owlet was found to consume only M. booduga.

In the present study, among rodents, M. booduga was found to be the major contributor of Spotted Owlet’s diet despite the presence of burrows of other rodent species in the surrounding area.  Other vertebrates that constituted the diet of Spotted Owlet were frogs and birds.  Among invertebrates, the diet mainly consisted of insects followed by molluscs. Insects preyed upon by Spotted Owlet were predominantly of orders Coleoptera, followed by Orthoptera,Dermaptera and some unidentified orders.  Previous studies have reported the diet of the Spotted Owlet comprising of insects, earthworms, mice, lizards, frogs and birds (Sandhu 1978; Majumdar1984; Ali & Ripley 1987).  In the present study, however, the remains of earthworms and lizards were not observed in the pellets of Spotted Owlet.  Zade et al. (2011) analyzed 52 pellets of Spotted Owlet in Maharashtra, India and determined the percent relative frequency of occurrence of various food remains.  The study indicated that insects belonging to the orders Orthoptera(Grasshoppers), Hemiptera (Bugs), Coleoptera(Beetles) and Dermaptera (Earwig) occupied 78.84% of the diet followed by small mammals (38.46%).  The remnants of insects in the pellets comprised of wings, legs, antennae and head.  Ali & Santhanakrishnan(2012) found the diet of the Spotted Owlet comprising mostly of arthropods (84.9%), i.e., Coleoptera (40.9%) and Orthoptera (32.4%) insects followed by vertebrates (12.1%).  In present study, insects alone constituted 53.8% and small mammals constituted 45% of the diet of Spotted Owlet.

The presence of remains of only mice among different rodent species found in the diet of Spotted Owlet in the present study indicates their potential in regulating mouse populations in crop fields as one of the components in integrated rodent pest management. Studies may, however, be taken to attract them to the crop fields by installing artificial nest boxes, T-shaped perches or poles.

Table 2. Mean number of prey items per pellet of Spotted Owlet at all the eight locations. 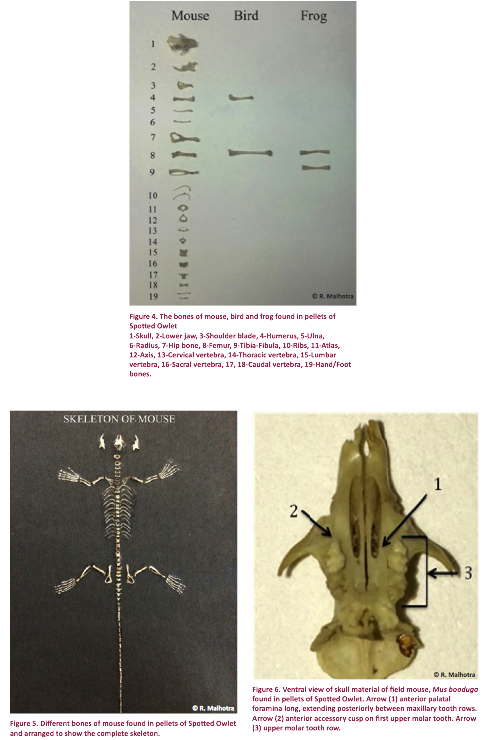 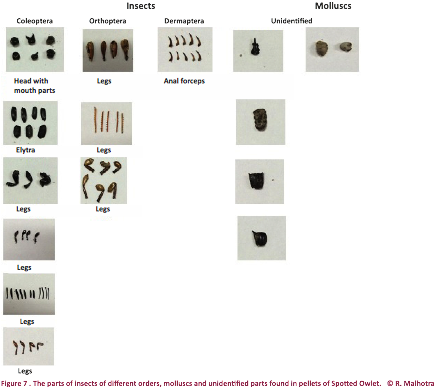 Table 4. Food consumption by rodents around roosting and nesting sites of Spotted Owlets.

Majumdar, N. (1984). A Collection of Birds of Adilabad District, Andhra Pradesh. Records of the Zoological Survey of India, Occassional Paper No. 65, 6–27pp.