Abstract: This study reports the recent sighting of Small Woodbrown Lethe nicetella from Khangchendzonga National Park in West Sikkim District, India.  It was originally described by de Nicéville (1887) based on the collection of males and one female by Otto Möller from Sikkim but the exact type locality was unknown.  We also reviewed various historical and contemporary reports on the description and distribution of this species.  We did not find any report of collection or sighting of the species from India after Elwes & Möller (1888).  The occurrence of this species in Sikkim is mentioned in Haribal (1992) but it is not clear whether the report is based on sightings or historical records because sighting location is not given, indicating its description based on museum specimens. Hence, we conclude that the Small Woodbrown L. nicetella was sighted after a gap of around 120 years.  Further, we have provided the first photographic records of a live individual of this species from India.  Our finding indicates a possibility of existence of many cryptic taxa that should be explored using morphological and molecular approaches.

Copyright: © Dewan. et al. 2018. Creative Commons Attribution 4.0 International License. JoTT allows unrestricted use of this article in any medium, reproduction and distribution by providing adequate credit to the authors and the source of publication.

Funding: This paper is a part of the project “Distribution pattern and conservation of butterflies along the elevational gradient in Rangeet Valley, Sikkim, Eastern Himalaya’’ funded by The Rufford Foundation through Rufford Small Grants, UK (Grant ID:20758-1). SD was supported with non-NET fellowship of University Grants Commission, New Delhi provided through Sikkim University.

Acknowledgements: We thank Sikkim University for providing facilities to undertake this research. We would like to thank Dr. Peter Smetacek and Mr. Monsoon Jyoti Gogoi for helping us with identification of Lethe nicetella and providing valuable historical notes on this species. We thank Dr. Basundhara Chettri for valuable suggestion on taxonomic approaches. We are grateful to the Research Evaluation and Monitoring Cell (REMC) of the Department of Forest, Environment & Wildlife Management, Government of Sikkim for providing us with permit to study butterflies in Sikkim. We would like to thank Mr. Nawangla Bhutia along with other members of Butterfly and Moths of Sikkim, Nature Conservation Society (BAMOS) for their continued support in our field studies.

Lethe Hubner [1819], is a butterfly genus under the subfamily Satyrinae of the family Nymphalidae.  The genus is distributed from Borneo through the Sunda Islands, Japan, Siberia, Himalaya and peninsular India (Mani 1986).  Morphologically, the upperpart of these butterflies are brown with apical spots on the forewing and spots or ocelli on the hindwing. They also bear distinctive ocelli on the under parts of the wings.  The habitat of most of the species of this genus is bamboo forest or grassy patches in the forest.

Sikkim is a small land locked Himalayan state in India covering an area of 7,096km².  It lies in western extremities of the eastern Himalaya, a part of one among the 36 biodiversity hotspots of the world (CEPF 2017).  Due to its steep mountainous terrain, Sikkim experiences rapid changes in climatic condition from sub-tropical type in low elevation to alpine condition in high elevation.  The synergetic effect of elevation, climate and historical factors (pre-historic tectonic movements and paleoclimate) has made it one of the most biologically diverse regions in the world, despite its small area (Ali 1962).  Butterflies in Sikkim are represented by 689 species, and genera such as Lethe appear to display high diversity (Haribal 1992).

Eminent naturalists extensively documented butterflies of Sikkim in the 19th century.  Among them were the noted entomologists de Nicéville (1881, 1882, 1883, 1885, 1894) and Elwes (1882, 1887) but most of this literature refers to taxonomy and listing of species.  Haribal et al. (1988) presented a checklist of 103 species of butterflies along with their sighting locations in Sikkim.  Haribal (1992) remains the most exhaustive publication made so far on the butterflies of Sikkim. With a gap of almost two decades, systematic studies on butterflies in the region have increased in recent years (Acharya & Vijayan 2011, 2015; Chettri 2015).  Species protected under Indian Wildlife (Protection) Act 1972, such as Symbrenthia silana (Kunte, 2010), Lethe margaritae and Neptis nycteus (Rai et al., 2012) have recently been rediscovered in the state after almost 100 years.  All these studies have indicated the probability of occurrence of many species that awaits rediscovery or possibly even new species discovery.

Here, we report the recent sighting of Small Woodbrown Lethe nicetella from Bakhim in West Sikkim District, Sikkim, India. The species is protected under Schedule II of Indian Wildlife (Protection) Act 1972 (Anonymous 1997).  We also reviewed various historical and contemporary reports on description and distribution of this species.  Since very less information is available on this species (and genus Lethe as a whole), our findings add to the existing information on Lepidoptera of the Indian sub-continent in general and Eastern Himalayan region in particular.

Distribution, habitat and status based on literature

Lethe nicetella is one among diverse group of species under Lethe genus of subfamily Satyrinae.  L. nicetella was originally described by de Nicéville (1887) based on the collection of males and one female by Otto Möller from Sikkim but the exact type locality is unknown.  Based on the museum specimen housed in the Natural History Museum, London, Talbot (1947) reported the occurrence of the butterfly in Gangtok and Karponang in Sikkim (1,524–2,740 m elevation).  The other notable mention of this species is by Elwes & Möller (1888). The authors recorded this species along the Goompahar and the flanks of Tonglo during July and August. “Goompahar” referred to here is now known as “Ghoom” and “Tonglo” as Tonglu, both lies in Darjeeling District, West Bengal, India.  Darjeeling was a part of the then Kingdom of Sikkim, but later managed under the British Empire and now a part of West Bengal State in India (Subba 1992).  Hence, based on Elwes’s observation (Elwes & Möller 1888), Darjeeling, West Bengal, should be included in distribution range of the species in the upcoming literatures.  Bailey (1951) reports the occurrence of the species in Chandagiri (1,820m) and Godavari (1,520m) in Nepal, which could be considered as the western most extent of the species.  The species has also been known to occur in Bhutan (Singh & Chib 2015).  Several authors have mentioned the occurrence of this species from India but it is not clear whether the authors collected the specimens or referred to the museum specimens (Table 1).

Table 1. Details of historical records of Lethe nicetella from India

Description of the species

Lethe nicetella is one of the smallest species in the Lethe genus with a wingspan of 45–50 mm.  Moore (1892) referred to this species as Sinchula nicetella but successive authors have followed the original name, i.e., Lethe nicetella.

The key morphological features of this species that distinguishes it from other similar species (Lethe sidonis and Lethe nicetas) are given in Table 2.

Six individuals of Lethe nicetella were seen at around 11:00hr on a sunny morning on 18 June 2017.  The species was initially mistaken as Common Woodbrown Lethe sidonis, a closely resembling species; however, the absence of ocelli on its forewing provided a clue of it being a different species.  We quickly photographed the species (both underwing and upperwing; Image 3) and matched the characteristic features of the photographed individual to that of the description in literature (de Nicéville 1887; Evans 1927; Haribal 1992; Kehimkar 2008).  On careful examination and with the help of experts we identified the species as Lethe nicetella.  The butterflies were feeding on faeces of cattle and horses and some individuals were basking exposing their golden-brown upperwing.  On being disturbed, the butterflies flew short distances and kept close to the ground.

We did not find any reports of collection or sightings of the species from India after Elwes & Möller (1888).  While Haribal (1992) mentioned the occurrence in Sikkim but it is not clear whether the report is based on sightings or historical records.  The author also mentions that out of 689 species listed, only 250 species were primarily sighted, and location of sightings has been provided for all of these species.  Since the locality of occurrence of Lethe nicetella is not mentioned in Haribal (1992), we believe that the description was based on museum specimens.  Hence, we conclude that this is the first sight record from India after a gap of around 120 years.  Further, we have provided the first photographic records of the occurrence of this species in India.  Photographic record of this species is also not available in exhaustive online sources such as http://www.ifoundbutterflies (Kunte et al. 2018).

Based on our field study, the species is not very rare in its distribution range, more specifically in the area of recent sightings.  Because of high similarity, researchers and naturalists could easily confuse Lethe nicetella with Lethe sidonis.  Hence, the occurrence and sightings of this species may have gone unnoticed. 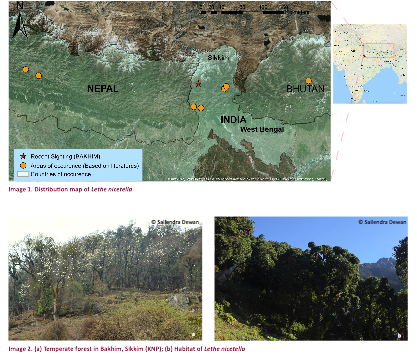 The rediscovery of Lethe nicetella after a gap of 120 years in Sikkim has indicated the occurrence of its habitat and host plants in the region.  No literatures, however, on host plants or ecology of this species are available.  We also presume that more such species occur in the region and need further exploration.  There is a possibility of existence of many cryptic taxa that should be explored using morphological and molecular approach.  The conservation focus is more biased towards large and charismatic species but butterflies are also a significant component of the forest ecosystem.  Hence, conservation attention is necessary for protection and long-term survival of underrepresented taxa such as butterflies.