Abstract: A biodiversity survey was conducted in Koraput District of southern Odisha between August 2014 and July 2017.  During the survey, occurrence of Mugger or Marsh Crocodile Crocodylus palustris was ascertained from five localities in a stretch of 23km of river Saberi, a tributary of the Godavari River system.  The area is in the Gupteswar proposed reserve forest of Odisha, and forms a boundary with Kanger Ghat National Park of Chhattisgarh State.  The geographic region offers possible scope for long term ecological monitoring jointly by wildlife organizations of Odisha and Chhattisgarh in collaboration with Central University of Orissa.  For long-term conservation of the species, activities may be initiated with annual monitoring of crocodile populations involving local people, and creating awareness about the Schedule-I status of crocodiles under the Wildlife Protection Act, 1972.

Copyright: © Debata et al. 2018. Creative Commons Attribution 4.0 International License. JoTT allows unrestricted use of this article in any medium, reproduction and distribution by providing adequate credit to the authors and the source of publication.

Acknowledgements: We are thankful to the local people from different parts of Koraput District for their help during the field study.  Special thanks to Himanshu Shekhar Palei for preparing the study area map.  Thanks to the editor and the anonymous reviewers for their valuable comments in improving the manuscript.

While carrying out a biodiversity inventory in Koraput District of southern Odisha, we recorded the presence of Mugger or Marsh Crocodile Crocodylus palustris Lesson, 1831, from five locations along the Saberi River (Fig. 1; Table 1) of Godavari River system.  This habitat has not received any earlier attention for monitoring or conservation, although Odisha State was the first to launch crocodile conservation in the country.  This status has continued to exist in spite of the fact that this is part of the Godavari River system, for which an elaborate plan for crocodile conservation was developed in 1976.  While presenting the existing scenario and findings from our survey, we feel that better conservation can be provided to crocodiles and their associates in the Saberi River at Gupteswar of Koraput through collaboration of the wildlife organizations of Odisha and Chhattisgarh with the Central University of Orissa at Koraput to initiate long term ecological monitoring (LTEM) in this region with public involvement and awareness.

The Mugger Crocodile in India

The Mugger Crocodile in Odisha

Once occurring widely in Odisha, restocked Muggers are now found in a few river systems of Similipal Wildlife Sanctuary (Sagar & Singh 1993), Mahanadi River in Satkosia Wildlife Sanctuary (Dutta et al. 2009) and perhaps in Ghodahada Reservoir adjoining the Lakhari Valley Wildlife Sanctuary.  These sites are monitored during an annual crocodile census by the state forest department, Odisha.  In 2017, Odisha State reported 218 individual muggers of which 77 were reported from Similipal, 86 in Satkosia, and 55 in Ghodahada Reservoir (Odisha Wildlife Organisation 2017).  Besides these three localities, reports on occurrence of mugger in other parts of Odisha are very scarce and are just presence/absence-type.

The river Godavari originates in the Western Ghats and flows eastward along the Indian peninsula to join the Bay of Bengal sea.  Historically, Godavari system used to have all the three species of Indian crocodilians, and conservation programmes were initiated with the constitution of three sanctuaries in 1978 in Andhra Pradesh. Manjira Sanctuary was constituted for Mugger Crocodile Crocodylus palustris; the Coringa Wildlife Sanctuary in the deltas was notified for reintroduction of Estuarine Crocodile Crocodylus porosus, and the Papikonda Gorge Sanctuary was created for possible reintroduction of Gharial Gavialis gangeticus (Singh 1984; Srinivas et al. 1999).

On the eastern side of Godavari system are two major tributaries, Indravati and Saberi, and a minor tributary- Sileru.  Gharials were reported till 1960s in Indravati (Ranjitsinh & Singh 2002) and information existed of their occurrence in Sileru-Saberi till 1970s (Singh & Bustard 1982).  While reporting on the status of crocodilians in the undivided state of Madhya Pradesh, Rao (1999) mentioned the presence of mugger crocodile in Indravati River in the district of Bastar, which is now in the state of Chhattisgarh.

River Saberi (Fig. 1), also called Sabari and Kolab, originates in Sinkaram Hill ranges of Odisha from the western slopes of Eastern Ghats at 1,370m, and is one of the main tributaries of the Godavari River system (Anonymous 2016).  River Saberi and the Kolab Reservoir on it assume significance in southern Odisha because of Upper Kolab Hydroelectricity Project, the Phase-I of which was completed in 1993.

River Saberi is the major distributary of Kolab Reservoir, and forms 200km long border with Chhattisgarh State.  On the western side of the river exists Kanger Ghat National Park of Chhattisgarh State and on the eastern side exists proposed Gupteswar Reserve Forest in Odisha.

Our report is based on direct sighting (Images 1 & 2), spoor marks (Image 3) and interviews with local people.  More specifically, on 28 December 2014, while discussing local biodiversity with the villagers of Siribeda Village of Koraput, we were told about occurrence of Mugger in the adjoining Saberi River, where local people witnessed Mugger yearlings.  On the next day we sighted two Muggers basking along the bank on the opposite side.  Subsequently, moving downstream, about 10km south from the first location on 11 November 2015, we observed spoor marks at two locations separated by a distance of around 3km along the muddy bank of the Saberi River (Image 3).  The spoor marks were identified by following the description given by Singh (2000).  Furthermore, during another occasion on 13 March 2016 near Badudi Pahad, occurrence of mugger was reported by the local villagers.  This site lies further south downstream at about 4km from the site where spoor marks were recorded.  On 12 January 2017, we saw and photographed one adult Mugger with an approximate length of 3.3m (11ft) long from snout to tail tip near Kenduguda Village (Image 1) situated along the upstream at about 2km from Siribeda Village.  On the same day, we further saw and photographed two more adult Muggers with approximate size of 3m (10ft) and 3.3m long from snout to tail tip near Siribeda village (Image 2).  All the recorded localities are situated within a stretch of around 23km within the Gupteswar proposed reserve forest and characterized by perennial and slow flowing river with wider river bed along with sandy and muddy banks.  The surrounding forest cover of the localities broadly falls under moist deciduous type (Champion & Seth 1968).  Detailed description of all the recorded localities is given in Table 1. 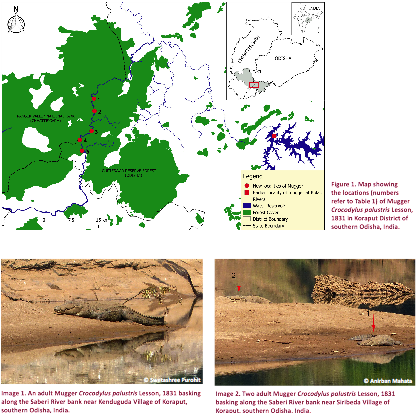 Table 1. Information on occurrence, habitat characteristic and threats to Mugger Crocodile Crocodylus palustris in the Saberi River, Godavari system in Koraput District of southern Odisha, India. Observation numbers in the Table refer to Figure 1. All the recorded localities are situated within moist deciduous forest.

The observation of three crocodiles on one single day, 12 January 2017 (Table 1), all in the size range 3-3.3 m, leads to infer that at least three adult Mugger crocodiles are present in a stretch of 23km of the river Saberi.  Since the local people reported about sighting of juvenile crocodiles, the muggers may be breeding in the Saberi at present.  The habitat characteristics of the recorded localities coincide with the general habitat preference of the species in much of its distribution range (Choudhury & de Silva 2013).

During our studies we did not come across any evidence of occurrence of Mugger in upper Kolab although Singh (1999) and Dutta et al. (2009) earlier mentioned about its occurrence in Kolab Reservoir and recommended for further verification.  The stretch of river where the Muggers have been recorded in this study is protected with statutory provisions under law on either bank by the states of Odisha and Chhattisgarh; however, because of difficulty in access to the study area and its remoteness, biodiversity studies appear to have recently started with those of Debata et al. (2015), Debata & Palita (2017), and Purohit et al. (2017).

The Poraja, Kondh, Gadaba, Bhotada, Bhumiya, Savara, and Saura communities of Koraput very often rely on ethno-biological practices (Palita et al. 2016).  Our informal discussion with the local people revealed that Muggers are being killed for different body parts.  They use the skin and other body parts of Muggers with a belief of curing different ailments such as burn injury and impotency.  With involvement of these people in crocodile monitoring and raising their awareness for conservation along with easier access to modern medicinal practices, local extinction of Muggers can be prevented.  Furthermore, as there are two forested habitats surround Saberi it is recommended to initiate long term ecological monitoring (LTEM) of biodiversity as done for the Chambal River (Sharma & Singh 2018).  LTEM can be taken up jointly by the wildlife organisations of Odisha and Chhattisgarh and the Central University of Orissa.  It is expected that the collaboration will produce reliable information for formulating effective conservation planning (IUCN/SSC 2008). 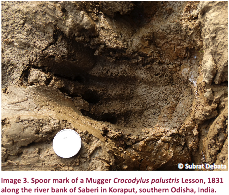 CITES (2017). Convention on International Trade in Endangered Species of Wild Fauna and Flora. Appendices I, II and III. http://checklist.cites.org. Downloaded on 15 September 2017.