Abstract: Rhododendron falconeri Hook.f. [= Azalea falconeri (Hook.f.) Kuntze] is a potential candidate for conservation in Sikkim State due to its threatened status and startling features especially during the flowering period.  We studied the status and habitats for R. falconeri across the Yuksam-Dzongri trekking corridor in Khangchendzonga National Park, Sikkim eastern Himalaya.  These findings will help to develop conservation strategies for R. falconeri and landscape beautification sustainability in the long run.

Copyright: © Pandey & Badola 2018. Creative Commons Attribution 4.0 International License. JoTT allows unrestricted use of this article in any medium, reproduction and distribution by providing adequate credit to the authors and the source of publication.

Author Details: Aseesh Pandey (PhD, Botany) is associated with the G.B. Pant National Institute of Himalayan Environment and Sustainable Development, Sikkim Regional Center (GBPNIHESD-SRC), as a researcher. His research areas are to understand the patterns of plant diversity, ecological and threat assessment of High-value Medicinal Plants (HMPs), of the Himalaya. H.K. Badola is former Senior Level Scientist (Conservation of Biodiversity) and Scientist in-charge, GBPNIHESD, Sikkim Unit has over three decades research experience dealing with various aspects biodiversity conservation and management, especially including the threatened taxa, in the Himalayas. Presently, he is a freelance expert of Biodiversity, Bioculture and Climate Change.

Acknowledgements: We are grateful to the Director, G.B. Pant National Institute of Himalayan Environment and Sustainable Development for providing necessary facilities to undertake this research. We highly appreciate the cooperation from the Forest Environment and Wildlife Management Department, Sikkim State. We also acknowledge the assistance from Mr Bhim P. Pandey, Mr B.L. Subba and support received from the local peoples during field surveys.

The Rhododendrons (family Ericaceae) comprise only 1% of the flowering plants (Pradhan & Lachungpa 1990).  Initially described by Carl Linnaeus in Genera Plantarum in 1737, worldwide, the genus Rhododendron encompasses almost 1,000 species (Leach, 1961; Bhattacharyya & Sanjappa 2014).  Over 90% of the world population of Rhododendrons are mostly concentrated in northwestern Himalaya to southeastern Asia with an extension to Nepal, northeastern India, eastern Tibet, northern Burma and western and central China (Leach 1961; Pradhan & Lachungpa 1990; Tiwari & Chauhan 2006).  At present, there are 102 species (Bhattacharyya & Sanjappa 2014) and 132 taxa of Rhododendron L. (82 spp., 25 subsp. and 25 var.) in India (Mao et al. 2017a,b).  According to Sastry & Hajra (2010), in India, Rhododendron species are found in the Himalaya from Kashmir to Arunachal Pradesh and in the forested mountain tracts of northeastern Indian states (Fig. 1).  Of the total recorded 129 taxa in northeastern India, the state of Sikkim harbours the second highest (42) representativeness of the genus Rhododendron after Arunachal Pradesh (119); however the genus is not reported from Assam and Tripura (Mao 2010; Sastry & Hajra 2010; Bhattacharyya & Sanjappa 2014; Mao et al. 2017a).  Sir Joseph D. Hooker described 34 new species and details of the 43 species including varieties from the Indian region in his monograph, Rhododendron of Sikkim Himalaya, explored during his visits in between 1848 to 1850 (Hooker 1849).  These species are naturally grown along the temperate to alpine zones and beautify the very landscapes (around 1,500–5,000 m).

The 42.55% (3,019km2) of the total geographical area of Sikkim (7,096km2) is under protected areas (Fig. 2) and represented by various Rhododendron species.  The Khangchendzonga Biosphere Reserve (KBR) harbours 86.78% of the total protected area and comprises of: (i) the core zone (1,784km2) also delineates as Khangchendzonga National Park (KNP), (ii) the buffer zone (835.92km2) and  (iii) the transition zone (311.20km2) (Badola & Subba 2012).  KNP has recently been notified by UNESCO (on 16.vii.2016) as the only mixed heritage site of India and is therefore an important conservation area with high ecological, biological diversity, and also contributes to natural and cultural significance in the Indian Himalayan region.  The present study focuses on (i) the identification of Rhododendron species having conservation needs and can be utilized for landscape beautification, and (ii) identification of the conservation and management sites for R. falconeri based on its distribution and status assessment.

Intensive literature survey was done for the existing information related to distribution and availability on Rhododendrons in Sikkim Himalaya.  The Yuksam-Dzongri trekking corridor nestled in the Khangchendzonga National Park in western Sikkim between 27.38–27.480N & 88.22–88.170E; 1,800-4,100 m, was identified for the present study (Fig. 3).  This trekking corridor is one of the most fascinating destinations for adventure trekkers in the northeastern region of the country, for its picturesque landscapes, ice-clad mountains including the highest peak of India, Mt. Khangchendzonga, and its wildlife are the top fascinations.  This trekking corridor is managed as eco-friendly plastic free zone and plucking flowers, leaves, littering, creating noise and/or disturbance in any form is prohibited as-per-the national park norms.  The forest guards from state forest department, Himal Rakshak (voluntary mountain guardians) along with state tourism department keep an eye on these issues.

During the year 2016–2017, different field surveys were conducted in the target area across different seasons and identified the Rhododendron falconeri Hook.f. as a very valuable and striking species having both the conservation and aesthetic value.  In the field, we examined various phenophases of the plant and confirmed species identification by consulting regional floras such as “Sikkim Himalayan Rhododendrons” (Pradhan & Lachungpa 1990), and “Flowers of the Himalaya” (Polunin & Stainton 2001).  Photographs of different phenophases were taken for further confirmation. To assess the status and distribution range in the study corridor, we positioned randomly a total of 45 (10x10 m2) plots in identified habitats, along 3,000–3,200 m  (Fig. 3).  In each plot, all the individuals of R. falconeri were counted along with associated tree species and the circumference at breast height (CBH) was measured.  Individuals with the CBH ≥30cm were considered as tree and the data of each elevation were pooled to calculate plant (density/hectare), frequency (%), total basal area (m2/hectare) and important value index (IVI) to estimate the status and availability of R. falconeri in targeted area.  We interacted with different group of trekkers (local, Indian, foreign), and porters/ guides, etc. and got their perception/views on the conservation and aesthetic significance of the species. 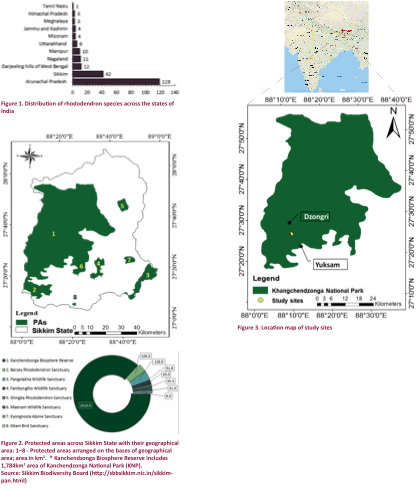 The Rhododendron falconeri Hook.f. known as Korlinga’ in Nepali and ‘Kalma’ by Bhutias, is a type species of sub-section falconera (Hootman 2003).  The species comprises two subspecies, falconeri and eximium (Nuttall) D.F. (Chamberlain 1982).  R. falconeri is distributed in the eastern Himalaya from eastern Nepal through Sikkim and Bhutan, including the adjacent areas of northeastern India (Arunachal Pradesh and northern West Bengal).  In the Sikkim Himalaya this species form characteristic Rhododendron forests between 3,000–3,500 m in coniferous and mixed deciduous/coniferous forest habitats.  Subspecies falconeri was first brought to the attention by Sir J.D. Hooker during his famous 1948–50 expedition to Sikkim.  Among Rhododendrons, R. falconeri is considered threatened for Sikkim Himalaya (Pradhan & Lachungpa 1990; Tiwari & Chauhan 2006);   whereas, the subspecies eximium is restricted to Bhutan between 3,300–3,600 m (Pradhan & Lachungpa 1990).

A medium-sized tree, grows to 10–25 m high, characterized in the field by its large (15–40 cm long and 7–20 cm broad), rugged, matted, dark green leaves with deep veins at dorsal surface, which is thickly covered rusty indumentum beneath (Image 1 b&f) and the peeling cinnamon coloured bark (Image 1a).  The petiole is 40–60 mm long grooved above, covered with greyish-white hairs; young leaves are velvety hairy.  Flowers are borne in round clusters of 20–25 (Image 1c–e).  The flower colour changes with the growing stages; the juvenile flowers are pinkish-white (Image 1c), while on maturity they turned in to creamy-white to yellow blotched with purple colour at base (Image 1d–e).  The mature flowers are bell-shaped, 40–60 mm long with 8–10 lobes and swollen at the base on the lower side (Image 1d–e).  Each hermaphrodite flower contains 12–16 white coloured stamens and large discoid greenish-yellow coloured stigma lying within the corolla, hairy on the basal half (Image 1d). Capsules are 16–18-chambered, 40–45 mm long, erect and woody.  Flowering time is April–May; however, at lower elevations, flowering starts in April which can be observed up to mid June in higher altitudes.

Rhododendron falconeri was observed forming forests with Betula utilis, Michelia lanuginosa [=Michelia velutina], Rhododendron arboreum and Prunus species at lower-altitude 2,900m (below Tshoka) and dominates the forest between 3,100–3,200 m along with Rhododendron barbatum, Rhododendron hodgsonii, and other associates, Abies densa, Tsuga dumosa, Acer campbellii, Viburnum nervosum [=Viburnum cordifolium] in the tree layer (Table 1), and Berberis and Rosa spp. in the shrub layer.  These stands offer refuge to various threatened faunal elements such as birds Dendrocopos darjellensis (Darjeeling Woodpecker), Upupa epops (Common Hooopoe), Eumyias thalassinus (Verditer Flycatcher), Corvus corax (Common Raven), Psilopogon virens (Great Barbet), Cuculus micropterus (Indian Cuckoo), Garrulax albogularis (White-throated Laughing thrush), pheasants like Lophura leucomelanous (Kalij), and mammals such as Naemorhedus goral (Himalayan Goral), Muntiacus muntjak (Barking Deer), and Ursus thibetanus (Himalayan Black Bear).  According to the field guides and forest guards this elevation range was the preferred habitat of Ailurus fulgens (Red Panda) now no more citing of this animal is documented since past few years. Above 3,280m, along the trek, R. falconeri is totally replaced by R. hodgsonii.  In some areas, this species is the dominant canopy tree, forming small forests typically up to 12–15 m in height.  It is a striking tree with bold and rough ornamental foliage, that people of the Lachung Valley in northeastern Sikkim use for packaging apples, lighting fires (Pradhan & Lachungpa 1990).  Further, the leaves of R. falconeri are reported as good source of protein, carbohydrate and possess enzymatic activities such as catalase, peroxidase etc. (Chhetri & Roy 2007).  The un-split woods of R. falconeri, R. fulgens and R. hodgsonii are used to make cups, spoons and ladles and handles of Khukri (a local dagger used by most of the inhabitants) (Tiwari & Chauhan 2006).

The density and frequency of R. falconeri varied across the elevational gradient, and the highest frequency (100%) and average density (103 ind ha-1) was observed towards higher-elevation (Fig. 4a).  The maximum IVI (56.3) was observed in the lower-elevation sites (P1-P3).  The maximum total basal area (TBA: 12.29 m2 ha-1) was observed at higher-elevation sites (Fig. 4b).  The highest density, frequency and maximum basal area in high altitude sites are an agreement of the suitable habitats of R. falconeri for its suitable adaptation; however, comparatively lower frequency, density and total basal area at middle elevation might be indicating the light demanding nature of the species, as the mid-elevation site is dominated by Tsuga dumosa and Abies densa in the higher canopy layer.  Elsewhere, some Rhododendron species are also observed to be vulnerable to moisture and light stress, and that suited better to dry and high radiation environments (Cai et al. 2014).  People perception on two major issues, (i) whether the conservation management of R. falconeri is important as strong forest element, and (ii) how they rate the aesthetic value of the species for eco-tourism promotion gave interesting ideas.  About 50% of trekkers had opinion that conservation of R. falconeri will help in the sustenance of wild fauna; whereas, the local porters/guides (80%) viewed these trees as a potential forest element to be conserved.  Overall, the trekkers (83%) had great admiration for this tree as one of the most aesthetic species (Fig. 5). 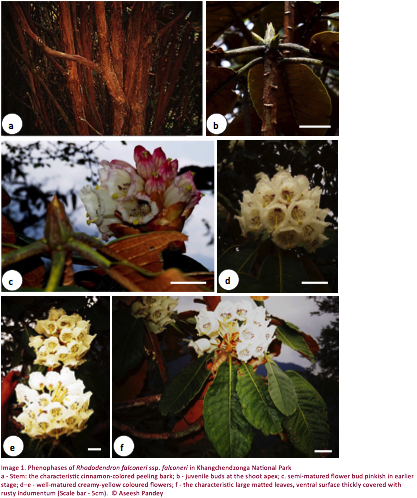 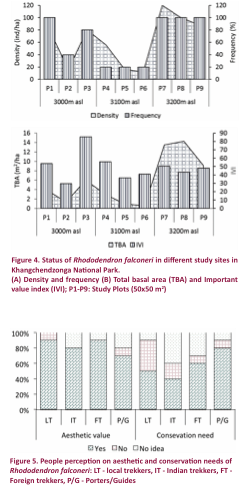 The rhododendrons are mostly used in landscaping and woodland planting with the help of area-specific specimens.  Rhododendrons are among the first to colonize the wasteland, and helps prevent soil erosion and promotes regeneration of vegetation (Leach 1961).  Considering the high tourist influx on the Yuksam-Dzongri trail, the tracking trails can be managed as in situ landscaped by conserving and showcasing the forests of R. falconeri as important biodiversity element of KNP.  Plantation of rhododendron trees taking the same genetic resource is also suggested in degraded parts of the trekking corridors according to their elevation range, as one of the precursors of eco-tourism promotion, until state government wishes to promote the same in park. This will not only help in the beatification of the trail but also attract more naturalists/ tourists to this region.