Copyright: © Kushwaha et al. 2018. Creative Commons Attribution 4.0 International License. JoTT allows unrestricted use of this article in any medium, reproduction and distribution by providing adequate credit to the authors and the source of publication.

Acknowledgements: The Director, CSIR-National Botanical Research Institute, Lucknow, India is highly acknowledged for providing facilities. The authors are also thankful to DST, Govt. of India, New Delhi for the financial support. The thanks are also due to the in-charge of herbaria mentioned in the work for granting permission for herbarium consultation. The PCCF (Wildlife), Uttar Pradesh and forest field staffs are also acknowledged for their hospitality and assistance provided during the field work.

Abstract: The present study provides a taxonomic account of the angiosperms of Sonbhadra District in Uttar Pradesh.  The district, which comes under the Vindhyan region of Uttar Pradesh, is one of the richest areas in the state as far as plant diversity is concerned.  It is spread over about 6788km² of geographical area, which constitutes about 36% forest cover on highly undulated land.  The extensive survey of the area conducted during 2011-–2016, critical examination of previous collections housed at various herbaria, and review of published literature have resulted in a total of 705 species belonging to 459 genera under 110 families.  Out of these, 541 species (76.73%) under 354 genera (77.12%) and 89 families (80.90%) belong to dicots, and 164 species (23.26%) under 105 genera (23.26%) and 21 families (19.09%) to monocots.  The present enumeration of the species also includes about 78 species cultivated in the area for various purposes.  Fabaceae (110 spp.) comprises of the maximum number of species, followed by Poaceae (89 spp.), Asteraceae (38 spp.), Cyperaceae (33 spp.), and Malvaceae (33 spp.).  Some of the largest genera in the area are Cyperus (14 spp.), Ipomoea (9 spp.), Solanum (9 spp.), Ficus (9 spp.), Crotalaria (7 spp.), Desmodium (7 spp.), Bauhinia (6 spp.), Hibiscus (6 spp.), Fimbristylis (6 spp.), Acacia (5 spp. ), etc.  The entire forest is chiefly dominated by trees such as Acacia catechu (L.f.) Willd., Boswellia serrata Roxb. ex Colebr., Butea monosperma (Lam.) Taub., Hardwickia binata Roxb., and Shorea robusta Gaertn.

The floristic account provides lots of information of plant wealth of an area, which may be beneficial for university students, botanists, researchers, NGOs, naturalists, environmental engineers, forest managers, conservation biologists, and policy makers.  Knowledge of floristic composition and structure of forest is also useful in identifying ecologically and economically important plants, analysing their diversities, and protecting threatened plants (Addo-Fordjour et al. 2009).  In the past, many important floristic accounts have been published for several states, districts, and biogeographic regions of India and abroad.  In addition to general flora of Uttar Pradesh (Duthie 1903–1929; Kanjilal 1966; Rau 1969; Uniyal et al. 1999; Chaudhary et al. 2016), several works related to different districts, national parks, and sanctuaries have also been produced by many (Kanjilal 1933; Srivastava 1938; Singh 1969; Srivastava 1976; Sharma & Pandey 1984; Sharma & Dhakre 1995; Verma & Ranjan 1995; Singh 1997; Saini 2005; Singh & Khanuja 2006; Kumar et al. 2015).  The floristic account of Sonbhadra District of Uttar Pradesh, however, is still unexplored in spite of its rich diversity. The production of state flora will be easier, once all the district floras are worked out systematically.  Hence, there is a need for proper inventory and documentation of all plants available in Sonbhadra District with their up to date taxonomic information.  Since the area is very rich in minerals and forest resources, many industries and factories of different kinds have been set up here.  Therefore, the present study will also be very important for a comparative study of the plants of the area in future and also to examine the effects of industrial pollutants on them.

Although the district has not been thoroughly inventoried earlier, the reference on the plants of the study area is available in Bhattacharyya (1963, 1964) and Srivastava (1955) wherein the plants of erstwhile Mirzapur District have been dealt with.  In these studies, about 460 species have been listed including about 130 species from the study area.  In addition, a few scattered works chiefly pertaining to ethnobotanical and medicinal plants have been carried out in the area (Singh et al. 2002; Chaudhary 2010; Singh et al. 2010; Singh et al. 2012; Singh & Dubey 2012; Mishra et al. 2012).  Recently, Kushwaha et al. (2016 a, b) have thoroughly studied the family Cucurbitaceae of the area and have also presented a preliminary overview of angiospermic plants.  Hence, the present work is the first study of its kind from the study area after its recognition as a district.

In this study, 12 field tours in different seasons were conducted between 2011–2016 to survey the area.  The plant materials were collected either in flowering or fruiting or in both stages with detailed information such as habit, habitat, colour of flowers and fruits, shape and size of trees, nature of bark of trees, GPS information, conservation status, etc.  The herbarium specimens were prepared following the standard procedure outlined by Lawrence (1951) and Jain & Rao (1977).  The identification of species was done with the help of different floras and important taxonomic works (Hooker 1872–1897; Duthie 1903–1929; Brandis 1906; Singh 1997) and also after matching with the authentic specimens housed at various Indian herbaria such as Botanical Survey of India, Allahabad (BSA), Botanical Survey of India, Dehra Dun (BSD), Botanical Survey of India, Kolkata (CAL), Forest Research Institute, Dehra Dun (DD), and National Botanical Research Institure, Lucknow (LWG).  All specimens collected in the present study have been deposited at LWG for future records.  In the present treatment, each species was furnished with the correct recent name following websites such as  The International Plant Names Index (IPNI), Germplasm Resources Information Network (GRIN), International Legume Database and Information Service (ILDIS), The Plantlist, Wikipedia, and Tropicos, along with habit, distribution  and reference to voucher specimens.  The families, genera, and species within the genus have been arranged alphabetically in the list.  All photographs included in the study have been take by first author (AKK).

Uttar Pradesh, one of the largest states of India with an area of about 240,928km2, has been divided into 75 districts.  Its forest cover, however, is about 16,583km2, which is only 6.88% of its total geographical area (Forest Survey of India, 2011).  In the present study, Sonbhadra District was selected for the floristic study to know the plant wealth of the area (Fig. 1; Image 1).  Sonbhadra District was carved out from the district Mirzapur on 4 March 1989.  It is the second largest district of the state comprising of about 6788km² geographical area.  It lies between 23° 51′54″ N–24° 46′18″ N  and  82° 40′24″ E–83°33′15″ E at elevations ranging from 315–485 m.  The temperature of the area varies from 32°C–42°C in the summer and 2°C–15°C in the winter.  This district is situated in the extreme southeast of the state, and is bounded by Mirzapur District in the northwest, Chandauli District in the north, Kaimur and Rohtas districts of Bihar in the northeast, Garhwa District of Jharkhand State in the east, Koriya and Surguja districts of Chhattisgarh State in the south, and Singrauli District of Madhya Pradesh in the west.  The district occupies 36.79% (i.e., 3,782.86km²) forest cover of the total  geographical area of the state.  The topography of the area is uneven due to the presence of hillocks.  The area that comes under the Vindhyan plateau of the state has tropical dry deciduous forest (Singh & Dubey 2012).

According to a revised classification of forest type in India by Champion & Seth (1968), the forest type of Sonbhadra District is tropical dry deciduous.  The whole area of the district has an interesting diversity of flora and vegetation due to variable plains, slopes, hills, and climate, represented by dry deciduous vegetation, natural scrub jungle, patches of grasses, and thick forest.  The whole area of the district is covered with rich plant diversity with trees at the top layer, shrubs at the middle layer, and herbs, climbers, and twiners at the ground level. 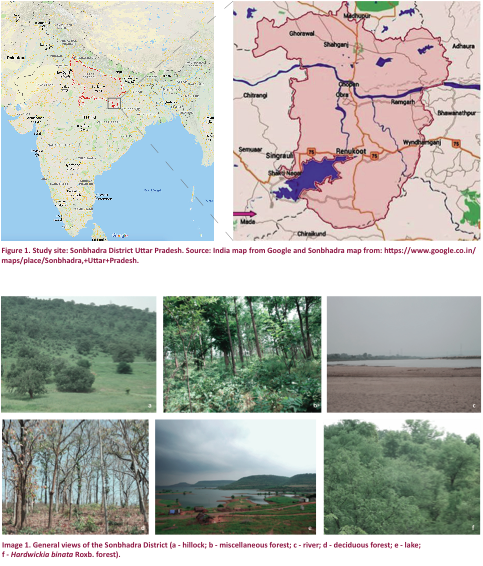