Copyright: © Shihan 2018. Creative Commons Attribution 4.0 International License. JoTT allows unrestricted use of this article in any medium, reproduction and distribution by providing adequate credit to the authors and the source of publication.

Acknowledgements: Author is grateful to Mr. James J. Young of Hong Kong Lepidopterists’ Society and the editors and reviewers of JoTT .

No extensive survey work has been carried out so far to find out the diversity of butterfly species in Bangladesh in relation to the associated plants, and records of larval host plants of butterflies are not so well documented in Bangladesh (Larsen 2004; Bashar et al. 2006; Chowdhury & Hossain 2013; Bashar 2014).  The main documentation was done by Bell (1911–1927), Kunte (2000, 2006) and (Mathew 2011) in the Indian region and it is followed for Bangladesh, so an opportunistic survey was conducted from February 2016 to November 2016 to document the larval host plants of butterflies in Chuadanga, Bangladesh (23.6312620N & 88.8483020E).  This district is situated in the southwestern part of Bangladesh.

During the survey period, the egg laying behavior of female butterflies on host plants and their immature stages were observed.  Many of the immature stages were collected and reared indoors in plastic containers under a controlled environment.  The boxes were covered with a thin cloth to allow for air movement and to protect the larvae from parasitoids.  The larvae were supplied with fresh young leaves and the containers were cleaned daily.  The plants were just provided with water within the glass box.  No food supplement was added. The eggs and larvae were reared till pupation and to adulthood.  Additionally, immature stages were also observed in the natural environment.  Immature stages and adult butterflies were identified according to: Tan 2011; Saji 2016; Saji et al. 2016a,b; and Saji & Karmakar 2016. Food plants were identified by the personal communication of Mr. Tapash Bardhan and Dr. Ahsan Habib and classification following ‘’The Plant List’’ website (http://www.theplantlist.org).

The results and discussion about the records of new larval host plants of butterflies are given below:

Papilio polytes is found commonly throughout Bangladesh including urban areas.  It inhabits gardens and other well-wooded areas, deciduous forests, semi-evergreen and evergreen forests.  It is abundant in the monsoon and post-monsoon season, but is known to occur throughout the year.  It occurs throughout the Oriental region (Kunte 2000; Varshney & Smetacek 2015).  The caterpillars eat a wide variety of plants of many genera, but they are all either large shrubs or small trees of the family Rutaceae (Kunte 2000).  Previously recorded larval host plants of this species are given in Table 1.

Papilio demoleus is perhaps found in more diverse habitats than any other swallowtail (Kunte 2000).  It is found in savannahs, fallow lands and gardens and in semi-evergreen and evergreen forests.  It is found in large numbers along streams and river-banks.  It occurs throughout the year, but more commonly during the monsoon and post-monsoon months.  It is distributed in India, Pakistan, Afghanistan, Sri Lanka, Nepal, Bhutan and Myanmar (Kehimkar 2008; Varshney & Smetacek 2015). It mainly prefers plants belonging to family Rutaceae as a larval host plant but is also known to feed on other plant families such as Rhamnaceae and Fabaceae (Kunte 2000; Kehimkar 2008).  The previously recorded larval host plants of this species are given in Table 1.

On 12 March 2016, a female was observed laying an egg (Image 21) on the young leaf of a young Ravenia spectabilis plant (Image 20) in the author’s house in Belgachi Railgate Para, Chuadanga (23.6314540N & 88.8499590E).  Since then the author regularly observed the plant and from 22-25 May 2016 five larvae were found on the plant.  The larvae were kept on the plant in its natural condition and on 2 June 2016, only one 5th instar larva was left on the plant.  The larva successfully pupated and the adult emerged in a few days.  The life cycle on Ravenia spectabilis is given in Images 21–27.

Junonia almana is a very common butterfly distributed throughout the country.  It inhabits the plains and hilly forests.  It is most common on the plains and in forests up to an altitude of 4,000m.   The dry season form camouflages and blends very well with its surroundings when it settles among dry, fallen leaves with the underside of the wings exposed (Mathew 2011).  It is distributed in India, Nepal, Bhutan, Sri Lanka, Myanmar and Pakistan (Kehimkar 2008).  Earlier recorded larval host plants of this species are given in Table 1.

On 17 May 2016, a female was seen laying eggs (Image 28) on the underside of leaves and young stem of Hemigraphis hirta (Images 37, 38 & 39) at Belgachi Railgate Para, Chuadanga (23.6314710N & 88.8499340E).  Immediately, two out of five eggs with the host plant were collected and placed in a plastic pot with water.  The eggs hatched after three days and took 19 days to complete their larval stage.  The adults emerged 10 days after pupation.  The lifecycle on Hemigraphis hirta is given in Images 28–36.

Junonia lemonias is a common butterfly distributed in India, Nepal, Bhutan, Myanmar, Thailand, western Malaysia, Philippines, India, Hong Kong, Taiwan and Japan (Kehimkar 2008).  It is seen in gardens, besides open farmlands and forest clearings.  It is on its wing throughout the year.  It is found up to 2000m in the hills. (Kehimkar 2008).  Previously recorded larval host plants of this species are given in Table 1.

A female was observed laying eggs on the underside of leaves of Hemigraphis hirta on 15 July 2016 at Belgachi Railgate Para, Chuadanga (23.6314710N & 88.8499340E).  This time nine eggs were found and after a few minutes, the same female also laid eggs on the leaves, stem and flower buds of Ruellia prostrata (Acanthaceae).  Two eggs were collected with plants from Hemigraphis hirta and reared in a plastic pot with water.  Both eggs hatched after three days and pupated after 18 days.  Adult emerged nine to 10 days after pupation.  The lifecycle on Hemigraphis hirta is given in Images 39–42.

The new recorded larval host plants of Papilio polytes and P. demoleus indicate that these two species take on new larval food plants to extend and adapt to different habitats.  It is also true for Junonia almana and J. lemonias.  In this study, it clearly indicates that it could also be due to the fact that larval host plants are not properly recorded in Bangladesh and therefore, one might expect to find more host plants which have not been reported earlier.  Extensive field surveys might help in understanding the dietary breadth of butterflies locally. 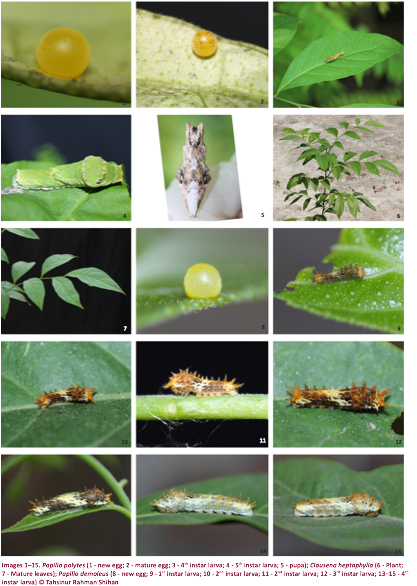 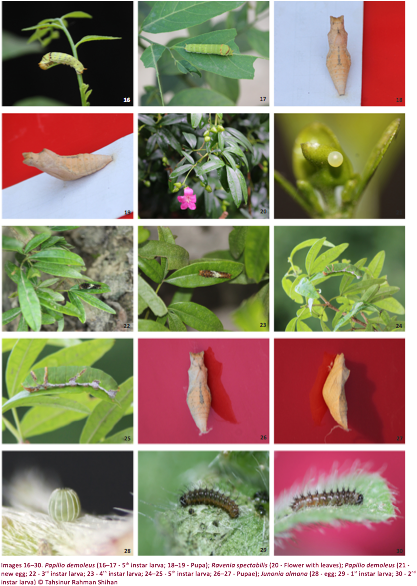 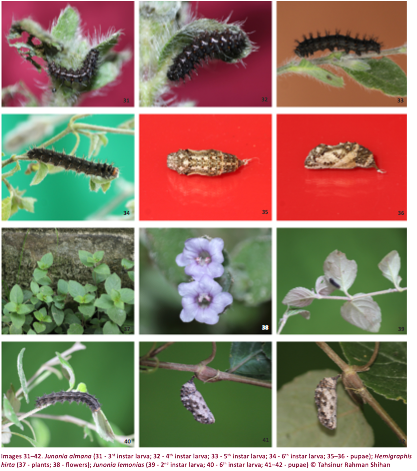 van der Poorten, G. & N. van der Poorten (2011). New and revised descriptions of the immature stages of some butterflies in Sri Lanka and their larval food plants (Lepidoptera: Papilionidae). The Journal of Research on the Lepidoptera 44: 111–127.