Abstract: University campuses play a significant role in the conservation of avifaunal diversity, but there are very few studies on birds of such local biodiversity hotspots in India.  Here, we document the patterns of abundance and species diversity of birds in Bharathiar University campus located in western Tamil Nadu, India.  Birds were sampled using point counts.  A total of 37 species belonging to 23 families were recorded from 144 point count samples.  Mean species richness per point count sample was 13.85±0.47 species (±SD), and Shannon diversity index (Hʹ) was 0.74.  This study provides baseline data for monitoring the avifauna in the university campus, and demonstrates the importance of university campuses in bird conservation.

Copyright: © Pragasan & Madesh 2018. Creative Commons Attribution 4.0 International License. JoTT allows unrestricted use of this article in any medium, reproduction and distribution by providing adequate credit to the authors and the source of publication.

Author Details: L. Arul Pragasan is serving as an Assistant Professor in the Department of Environmental Sciences, Bharathiar University since March 2011. His area of research is on environmental ecology, particularly on biodiversity conservation, functional ecology, carbon stock assessment, experimental research on climate change impacts. He is guiding PhD, MPhil and MSc students for  their reseach projects.  M. Madesh is a MPhil student, has succussfully completed MPhil in Environmental Sciences, and currently looking for research position in a reputed institution. His area of research interest is on avifaunal ecology.

Acknowledgements: Authors sincerely thank Bharathiar University for the support of this research work.

The combined effect of climate change (Opdam & Wascher 2004; Knudsen et al. 2011) and urbanization (McKinney 2006; Paton et al. 2012; Tscharntke et al. 2012; Ferenc et al. 2014; Rayner et al. 2015) leading to habitat loss remains one of the most challenging issues for conservation of bird diversity.  Under this situation, remnants of wild vegetation and plantations in walled university campuses provide a hope for bird conservation.  In India, there are 744 universities with varying land size, and most of them have at least a few patches of natural vegetation and plantations.  Documentation of birds in such areas, however, was not given importance on par with forests and other reserve areas.  Bharathiar University (BU) in western Tamil Nadu with c.1000 acres of land area in tropical climatic zone is one among the last citadels of biodiversity in an increasingly urbanized landscape.  An attempt was made in the present study to achieve the following main objectives: (1) to determine species diversity, frequency, abundance and importance value index of birds on BU campus, and (2) to study the patterns of dominance among the birds of BU.

The present study was carried out on BU campus located in Coimbatore, Tamil Nadu, India (Fig. 1).  It covers ca. 1,000 acres and lies between 11.031–11.0470N & 76.869–76.8700E  at tropical climatic zone.  The terrain of the campus is almost plain, and the elevation gradually varies from 482–512 m.  The campus is predominantly covered with non-calcareous sandy loam red soil, with low organic carbon.  It has a few remnants of wild vegetation and plantation forests of about 25 years old.

The available climate data (Karthick & Pragasan 2014) for the study area (for the period 2002–2011) revealed that the average annual rainfall was 645mm, and the rainfall was maximum (54% of the total rainfall) during October–November (Fig. 2).  Mean monthly temperature for the same period was 270C (Fig. 3).  The mean minimum and maximum temperatures were 220C and 320C, respectively.

Abundance of birds in BU campus was estimated using point counts survey method (Bibby et al. 1992; Horak et al. 2013).  In the present study, point count stations were established at every 100m distance along a 500-m line transect, and at each survey point 10 minutes were spent counting birds (Jiguet et al. 2012) within a radius of 50m.  A total of 144 point counts were done in 97 non-rainy days from February 2014 to July 2014.  Samples were carried out soon after sunrise in the morning (06:00–08:00 hr) or before sunset in the evening (16:00–18:00 hr).  Birds were identified using the field guide by Ali (2012).  The IUCN Red List of Threatened Species was followed for nomenclature and taxonomy.

Diversity of birds in the university campus was determined using Shannon diversity index (H’) following Magurran (2004), H’ = - ∑pi × ln pi, where, pi is the proportion of the total number of individuals of species ‘i’.  Chao 2, a non-parametric estimator of species richness which uses occurrence data from multiple samples in aggregate to estimate the species diversity of the whole, was determined using Biodiversity Pro (version 2).  The observed species richness was compared with expected species richness (Chao 2) using species-sample curve, as number of samples on x-axis against cumulative number of species on y-axis.

Modified important value index (IVI), a measure of relative prominence of various species was calculated for all the species to find the key species in the university campus following Suripto et al. (2015), IVI = rF + rA, where rF is relative frequency of the species; rA is relative abundance of the species. 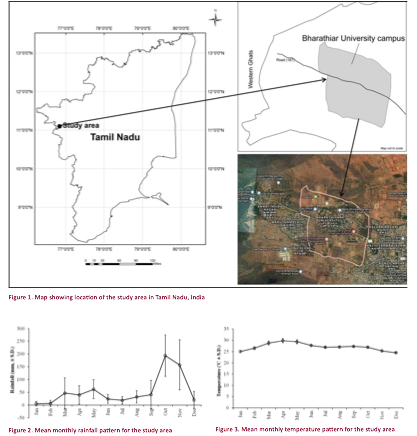 Birds are used for assessing ecosystem quality (Ridley et al. 1984).  To have effective conservation measures in place, it is necessary to study the population size of birds.  Population studies were, for long, used to monitor long time changes in natural and manmade ecosystems (Wiens 2001).  The study area, Bharathiar University campus with a few patchy remnants of wild vegetation, plantation, garden, avenue plants and lawn, structurally provides a complex landscape that supports a fair diversity of bird species.  Empirical and theoretical evidence have proved that local species richness is highly influenced by the landscape and regional species pools (Lawton 1999; Gaston 2000), and structurally complex landscapes support more species than simple landscapes.

It is important to study the diversity of avifauna in the university campus to help to monitor and conserve the biological diversity of the region where buildings are increasing in numbers replacing the green vegetation and agricultural lands that support avifauna.  In the present study, the maximum species (37 species) was achieved at the 35th point count sample (one-fourth of the total sample size) indicating the sampling adequacy.  When compared, the observed species richness and the expected (Chao2) species richness were almost similar in terms of cumulative species richness (Fig. 4).  The total abundance was recorded greater for House Crow as expected, and it was followed by Indian Peafowl, Common Myna, Yellow-billed Babbler and Cattle Egret (Table 2).  While, the frequency of bird occurrence was maximum observed for Indian peafowl (4.9%) indicating that the national bird occupies all nook and corners of the campus, and it was surprising to observe such a big bird scored high against the most abundant House Crow.  In fact, the latter scored less than Common Myna, Rufous Treepie and Western Koel, and scored the same as Large-billed Crow and Purple Sunbird (Table 2).

Categorizing birds into dominant/rare category helps to understand the structure of a bird population.  In the present study, although there are 37 species, about 43% of them belong to very rare category (<100 bird counts).  This explains the bird population structure of the campus.  Though, all the species of the campus come under Least Concern category according to the IUCN Red List, there is a pressing need for prompt steps to conserve bird populations in the campus. To maintain a viable population, conservation measures are needed.  There are several factors that influence changes in bird populations such as availability of food, location of nesting sites, availability of nesting materials, introduced diseases, introduced and invasive flora, predators, and competitors (Margules et al. 2000; Ramesh & McGowan 2009), however, habitat loss is considered atop among the others.  At this stage, educational institutions like BU with natural and plantation forests serve as a good habitat for the bird community.

Bharathiar University campus supports a fair diversity of birds.  The present study provides baseline data for monitoring bird diversity in the campus.  This study creates awareness on documenting birds in other university campuses in the nation.  Future research on the behavior and feeding ecology of birds in the campus will help to understand birds more accurately and thereby pave the way for better conservation measures.  Birds play ecologically significant role in plant pollination and seed dispersal, and their conservation is highly necessary for the proper functioning of the ecological system.  Although there are natural and plantation forests in the BU campus as habitat for birds of this region, conservation measures are of immense need for their future survival.  We suggest following conservation measures for protecting the diversity of birds in the university campus: (1) awareness program for conservation of bird species among the campus aspirants, and (2) initiating biomonitoring program is necessary for monitoring and conservation of the birds of BU campus.